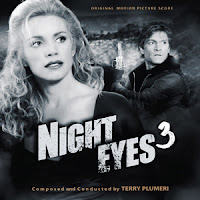 For More Details: [CLICK HERE]
As its title suggests, Night Eyes Three is the third installment in the popular erotic thriller franchise, written and directed by Andrew Stevens who also plays the lead role of security expert Will Griffith. Each film follows the same formula: through his surveillance job, Will gets involved in the private lives of his rich and famous clients who usually want to nail him in more than meaning of the word. Part Three in particular pits Will against a sensual television actress who needs protection from his jealous ex-boyfriend all the while a rival company tries to put Night Eyes Security out of business. Can Will survive the temptation and the enemy approach? According to Night Eyes Four, absolutely!
KeepMoving Records is proud to present the sensual and dark thriller score of Terry Plumeri, the man behind such fan favorite scores as Death Wish V and Black Sea Raid. The score is characterized by a beautiful and elegant main theme which Terry composed to reflect on Will’s character and his unfulfilled longing for a better life which he can only observe through his security position. The bulk of the score has a suspenseful darkness much like most neo-noir thriller scores of the 1990s with a haunting, muted brass section that captures the dark passion between Will and his employer, Zoe. A breath of fresh air is provided by the solo alto flute theme for Natalie, a 10-year old girl who gets caught up in the conspiracy. It’s dark, it’s delicious, it’s Plumeri.
First I wanted to welcome "KeepMoving Records" as a new sponsor here on this site and letting us sample some of their awesome score from film, television and video games. This is a suspenseful score that is long overdue to have had a release, now it might have been available on vinyl once.. maybe a cassette... never on Cd at least that I knew about. Okay I ramble it is a great score with plenty of twisty corners, it just a solid release... so go get it, it's limited!
-Jeremy [Retro-Zombie]

Trivia: How many Night Eyes films were there?
Hosted by Unknown at 2:01 AM