COSTUMES FROM SUPERMAN: THE MOVIE 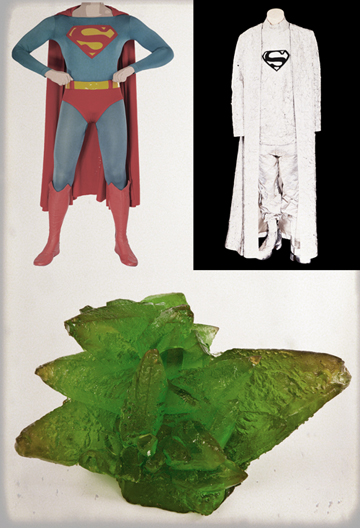 CHRISTOPHER REEVE, MARLON BRANDO COSTUMES
FROM SUPERMAN: THE MOVIE
WILL BE FEATURED
AT PROFILES IN HISTORY'S
JULY HOLLYWOOD AUCTION
THE AUCTION WILL BE THE WEEKEND OF
JULY 20 IN LOS ANGELES
Profiles In History
LOS ANGELES - May 31 - Profiles in History, run by Joe Maddalena, is proud to announce that a complete Christopher Reeve Superman costume and complete Marlon Brando "Jor-El" costume from Superman: The Movie will be for sale at their July Hollywood auction. These items are a part of the fabled Dreier Collection, a collection of such breadth and immensity that it will take several years to completely auction off.

The complete Christopher Reeve Superman costume consists of a long sleeve leotard of blue and red stretch jersey, a chest emblazoned with the trademark Superman “S” and an interior Bermans; Nathans label typed “Christopher Reeves [sic] 12186 Superman”; a pair of matching blue stretch nylon tights with interior Bermans; Nathans label typed “Christopher Reeve Colour A 18629”; a yellow-painted leather belt; a long flowing cape of scarlet wool with padded shoulders and interior bias label handwritten “C. Reeve Colour B Walking,” the back having a yellow Superman “S” logo with black stitched borders; and a pair of knee-length red leather boots with zipper closures, each boot with Bermans; Nathans labels typed “Christopher Reeves [sic] 12188” and handwritten “Waterproof.” The costume was originally acquired by a sub-contractor who worked as a set decorator and a special effects flying/rigging technician on the first two Superman films at Pinewood studios in London. Its ownership was later transferred to a make-up artist in Nashville, TN, whose letter of provenance will accompany this fantastic costume. Studio labeled throughout, this costume is without question, the finest original Christopher Reeve Superman costume Profiles in History has ever encountered. Easily one of the most recognizable costumes in Hollywood history, it is the most important complete costume from this landmark film ever brought to public auction. It is expected to fetch $60,000 – $80,000.

Marlon Brando wore this amazing, complete Jor-El costume in his memorable role as the father of Superman in Superman: The Movie. The costume consists of a tunic with the iconic “S” insignia with faux jewel detailing, sleeveless full-length robe with faux jewel detailing on the shoulders, pants and boots. The entire costume is layered with a luminous silver/gray reflective material, which appears to glow when subjected to strong light. This ingenious costume effect was first innovated in this production and used on all of the inhabitants of the planet Krypton providing a fantastic otherworldly appearance. Tunic, robe and boots have Bermans and Nathans labels typewritten “Marlon Brando Superman.” The costume comes with a Warner Bros. certificate of authenticity and is expected to fetch $60,000 – $80,000.

You can also own the screen-used Kryptonite crystal and box from Superman III. This green resin “crystal” formation of the crippling mineral Kryptonite is Superman’s only weakness.  Measuring 12 in. long and 6 in. tall, this particular prop can be positively screen-matched to the scene where Christopher Reeve is shown cradling the piece in his hands, as a small imperfection on one edge is clearly visible. The box was used by Gus Gorman (Richard Pryor) in disguise as an army general to deliver his synthetic Kryptonite to Superman at the Smallville town fair. Includes a dark wood box with polished brass fittings and measuring approx. 12 in. x 12 in. x 8 in. It includes a letter of authenticity and is expected to fetch $8,000 – $12,000.
Hosted by Unknown at 2:02 AM

Wouldn't be surprised if the Superman costume went for even higher.

Hollywood Treasure is my favorite show!!!
Talk about a dream job. I'd have to work on trade - I'd still be paying off the Jim Henson lot they had a while back. Living in my car with my Skesis mask and Mystic feet.