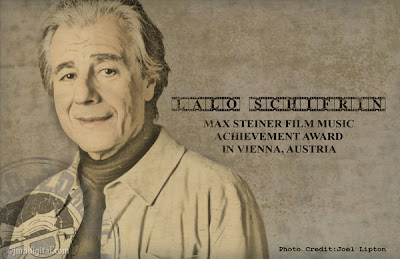 “I am excited to collaborate with the City of Vienna in putting together a program of so many great works by the world renowned composer, conductor and musician, Maestro Lalo Schifrin. It will be an honor for me to conduct some of his classic and diverse compositions from film and television,” said Newman.
Schifrin has written over 100 film and television scores including Mission Impossible, Mannix, Cool Hand Luke, Bullitt, The Cincinnati Kid, Amityville Horror, Enter The Dragon, four of the Dirty Harry films, and more recently Abominable and the Rush Hour trilogy. Lalo Schifrin has now won five Grammys® (twenty-two nominations), one Cable ACE Award, and six Academy Award® nominations. His longtime involvement in both the jazz and symphonic worlds came together in 1993 as pianist and conductor for his on-going series of “Jazz Meets the Symphony” recordings.
Hollywood in Vienna is a symphonic gala concert celebrating classic and current masterpieces of film music in the prestigious Wiener Konzerthaus (Vienna Concert Hall) in Vienna, capital of Austria. Within the course of each gala, the City of Vienna awards one of today’s leading film music composers with the Max Steiner Award.
The Viennese Max Steiner was one of the most influential pioneers in the history of Hollywood film music and scored all-time classics like King Kong, Gone with the Wind, and Casablanca. In contrast to the common idea that the music of Hollywood is a typical American art form, film music was actually "exported" to the United States by composers like Steiner and Erich Wolfgang Korngold and now returns back to its roots – to Vienna, the City of Music.
The Max Steiner Award is presented to one of the world's leading film composers at the Hollywood in Vienna gala concert. The award honors extraordinary achievements within the genre of film music by the musical capital of Austria, Vienna.
Hosted by Unknown at 10:40 AM