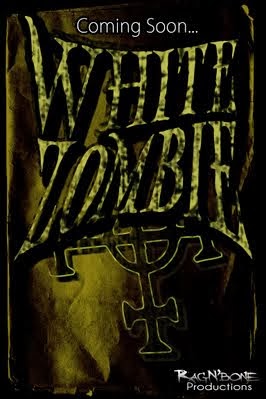 RagNBones has taken on the ambitious task of re-imagining the Bela Lugoisi film WHITE ZOMBIE.  The original WHITE ZOMBIE is one of those films I have seen a hundred times yet I remember almost nothing about it but the fact that Bela Lugoisi is in it.  It is one of those films I have playing on the t.v. in the background every Halloween morning but I never just sit down and watch it.  I don't know why I do that.  RagnBone Productions was nice enough to send me a screener of their version of WHITE ZOMBIE.  Thank you so very much!

Madeline White and her fiance, Neil Bellamy plan to marry each other on a plantation on ZOMBIE ISLAND!  Actually it is not called 'ZOMBIE ISLAND' but that is what I call it because there are zombies everywhere.  The plantation owner, Gillies Beaumonde has convinced Madeline to come to his plantation for the wedding to try and convince her to fall in love with him.  Beaumonde will do anything to win her over including associating himself with Severin the local evil voodoo practitioner who everyone strongly dislikes because he is weird.....and I guess because he is evil.  With Severin's aid, Beaumonde poisons Madeline on her wedding day causing her to seemingly die.  With the powers of voodoo she is brought back from the dead becoming the prize of three men competing to have her for themselves.  While Beaumonde was planning on screwing Neil out of a bride, Severin was planning on screwing Beaumonde out of a bride and all his wealth.  CLICK HERE TO CONTINUE READING....