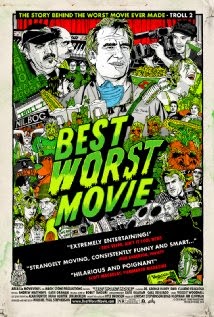 BEST WORST MOVIE is the best documentary I have ever seen.  It deals with the concept of what gives a film its "cult" status.  The documentary explores the weird fascination some people have for the movie TROLL 2.  The kid from TROLL 2, Michael Stephenson is all grown up and has become a film maker himself.  He takes us on a little journey learning just how much people truly love TROLL 2.  The film TROLL 2 has experienced a surge in popularity in the last few years.

God bless George Hardy.  What an American treasure and wonderful human-being.  He played the father in TROLL 2 and now in real life he is a dentist.  He is an extraordinary man living in a normal  ordinary world.  BEST WORST MOVIE follows him most of the time as he too discovers what a popular guy he is for playing the father in TROLL 2.  In the past George wanted to be an actor.  Now he is given a chance to experience a taste of what it is like to be famous.  He goes through the highs and lows of fame questioning whether or not he made the right decision in his past.  Ultimately he does come to realize that he has a great life now and that he did indeed choose the right path.  He is such a joy to watch on the screen as he cheerfully accepts his role as being in what a lot a people consider to be the worst movie ever made relishing the attention.  Often BEST WORST MOVIE breaks away from it's main story of George Hardy to also interview other actors from TROLL 2 and let us know what they have been doing and where they are now.  It is interesting to see the real people who we only thought of as characters in a bad movie.  I particularly like how the director, Claudio Fragasso tries to understand his own film's popularity.  He was trying to make a scary movie so when audiences are laughing he doesn't understand why.  The notion of what is "campy" is lost on him.  Maybe it is a cultural thing.  CLICK HERE TO CONTINUE...

Troll 2? I remember the first one unfortunately, but never saw beyond that.

The sequel has nothing to do with the original. In fact the sequel doesn't even have trolls in it!