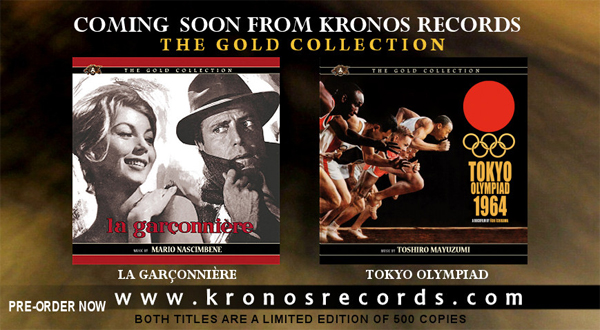 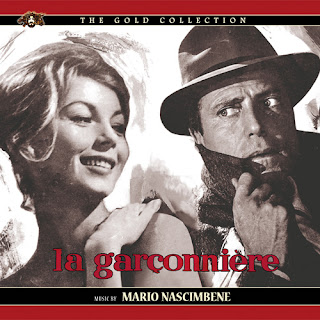 KRONGOLD019:  "LA GARÇONNIÈRE" Music by MARIO NASCIMBENE - Kronos Records The Gold Collection is proud to the soundtrack of Giuseppe De Santis 1960 drama LA GARÇONNIÈRE (THE BACHELOR APARTMENT), the story of Alberto (Raf Vallone) a building constructor who repeatedly cheats on his wife Giulia (Eleonora Rossi Drago) with young fashion model Laura (Gordana Miletic, real life wife of director De Santis) in an apartment he rented in a popular neighborhood. Giulia follows her husband, finds out the truth and decides to leave him. Eventually the couple gets back together but things will never be the same again. http://kronosrecords.com/KG19.html 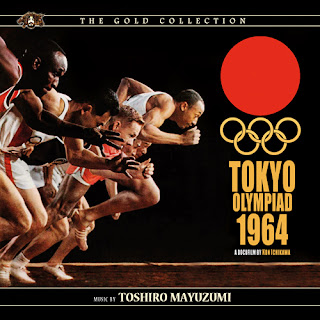 KRONGOLD020:  "TOKYO OLYMPIAD 1964" Music by TOSHIRO MAYUZUMI - Kronos Records The Gold Collection is very proud to present the soundtrack CD of KON ICHIKAWA'S TOKYO OLYMPIAD 1964, considered by many to be one of the greatest documentary-films ever done with a musical score that according to many has contributed not little to the cult status of Ichikawa's film.

To score the film Ichikawa chose an old collaborator of his, fellow Japanese artist Toshiro Mayuzumi, with whom he had already worked together on various films.  Mayuzumi was a world recognized composer for Orchestra, Ballet, Operas, Electronic Music and Cinema.  It would be for the latter though that composer would be most remembered for worldwide. He worked with most of Japan’s prominent directors of his era but also worked in Europe and U.S.A. Most notable his collaboration with celebrated actor / director John Huston  on The Bible: In the Beginning and Reflections in a Golden Eye. http://kronosrecords.com/KG20.html

Great additions to your score collection... I encourage you to check these out, you won't be disappointed!
Jeremy [The Wolf]
Hosted by Jeremy [Retro] at 8:17 AM