Fox Music/Hollywood Records releases the digital original motion picture soundtrack to Ford v Ferrari, directed by James Mangold (Logan, Walk the Line).  Marco Beltrami and Buck Sanders composed the music for Ford v Ferrari, which was recorded at the legendary Capitol Records Studio in Hollywood.   The soundtrack includes three score cues alongside classic 1960’s tracks including “Money (That's What I Want)” by The Kingsmen, “Have Love Will Travel” by the Sonics and “I Put a Spell on You” by Nina Simone.

Mangold originally collaborated with composer Beltrami and his "right-hand man," audio experimental producer Sanders on 3:10 to Yuma, for which Beltrami’s score received an Academy Award® nomination. The pair then reunited with Mangold on The Wolverine and Logan.  For Ford v Ferrari, Beltrami and Sanders shared scoring duties. Their original music was inspired by the energy and grit of 1960s garage bands, which led to the choice to record with a 15-piece band including 3 guitars, keyboards/piano, organ, bass, standup bass, drums, percussion and a horn section. 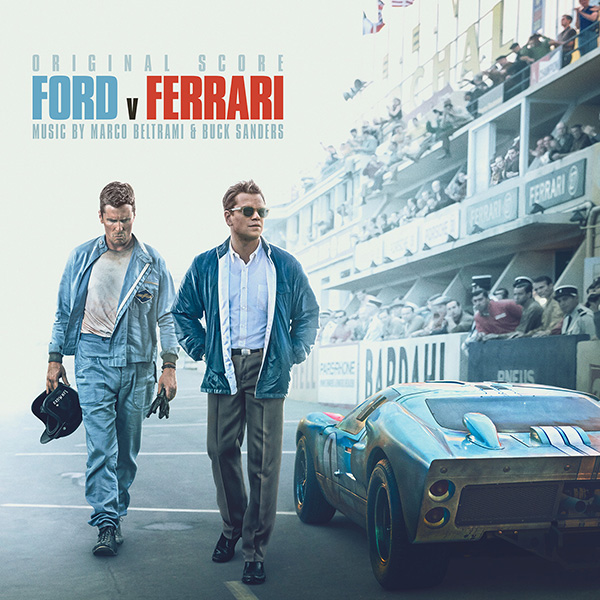 Beltrami and Sanders’ collaborations span a period of more than two decades’ worth of prestige films and genre classics. They have garnered a host of accolades including both receiving Academy Award nominations for their score on The Hurt Locker.  Additionally, Beltrami recently earned a Golden Globe nomination for A Quiet Place, which included sound design by Sanders. Their numerous projects together also include Resident Evil, The Homesman, I, Robot, Warm Bodies and World War Z, working with such acclaimed filmmakers as Tommy Lee Jones, Joon-ho Bong and Roland Joffé.

Academy Award-winners Matt Damon and Christian Bale star in Ford v Ferrari, based on the remarkable true story of the visionary American car designer Carroll Shelby (Damon) and the fearless British-born driver Ken Miles (Bale), who together battled corporate interference, the laws of physics, and their own personal demons to build a revolutionary race car for Ford Motor Company and take on the dominating race cars of Enzo Ferrari at the 24 Hours of Le Mans in France in 1966.   Ford v Ferrari is directed by James Mangold with a screenplay by Jez Butterworth & John-Henry Butterworth and Jason Keller.  Producers are Peter Chernin, Jenno Topping and James Mangold.

Heard the movie is excellent.