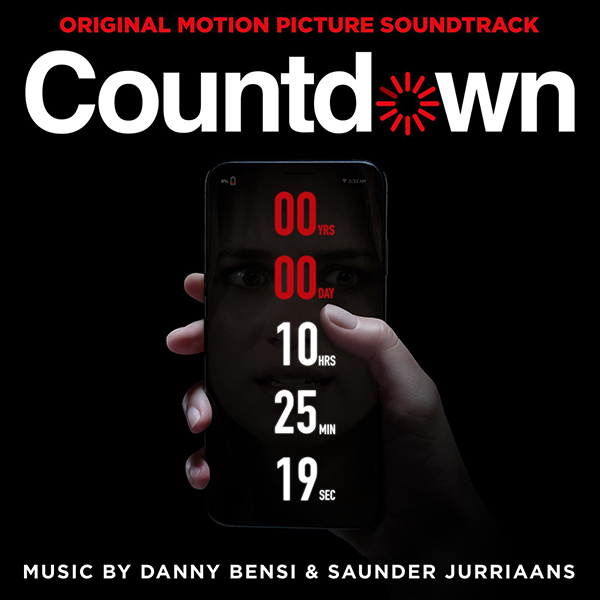 Of the soundtrack, composers DANNY BENSI & SAUNDER JURRIANS say, “We had a great time scoring Countdown full of moody analog synths, atonal string orchestras and piercing jump scares.  We tried to stay true to a traditional horror score but added some of our own unique twists and unpredictability!”

When a nurse downloads an app that claims to predict the moment a person will die, it tells her she only has three days to live. With the clock ticking and a figure haunting her, she must find a way to save her life before time runs out.

Danny Bensi and Saunder Jurriaans are two award-winning film composers. They have been playing music together for over twenty years. In the last eight years, they have completed well over 100 acclaimed film and TV scores.

Before moving to New York in 2001, Danny was raised studying the cello in Europe, while Saunder grew up playing guitar in Seattle’s thriving music scene. As a duo, they are known for bold unpredictability, uniqueness, and their ability to interpret a wide range of genres for their scores. Drawing from an array of modern classical styles and beyond, their compositions are filled with atypical orchestrations, sensuous melodies, and visceral soundscapes.

One of their first films, Martha Marcy May Marlene (Dir. Sean Durkin) garnered much attention for its sparse and suspenseful score. Soon after, their sinister score for Enemy (Dir. Denis Villeneuve) won “Best Musical Score” at the Canadian Screen Awards. In 2015, they scored Joel Edgerton’s acclaimed suspense thriller The Gift. Some more recent films include The Autopsy of Jane Doe, Joel Edgerton’s Boy Erased, and The Current War.  Upcoming films include The Lodge, The Wolf Hour, The Rental, and Countdown.

In TV, Danny and Saunder are scoring all of Jason Bateman’s series Ozark (Netflix), American Gods (STARZ), On Becoming a God in Central Florida (SHOWTIME), Nos4a2 (AMC), and Fear the Walking Dead (AMC).  Upcoming TV shows include Omens (Marvel) and the HBO’s crime thriller The Outsider based on the Stephen King novel.

Danny and Saunder have also written remarkable documentary scores for LA 92 (Nat Geo), Amanda Knox (Netflix), and The Wolfpack (Netflix/Sundance Grand Jury Prize Winner), and recently released Tell Me Who I Am (Netflix)

In addition, Danny and Saunder have also successfully ventured into the video game world with their score for Ubisoft’s For Honor.