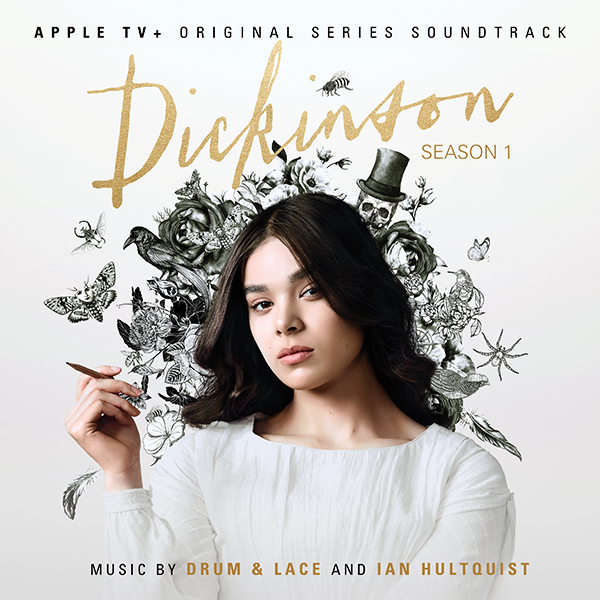 Milan Records, an imprint of Sony Music Masterworks, today releases the soundtrack for Apple’s “Dickinson” – DICKINSON: SEASON 1 (APPLE ORIGINAL SERIES SOUNDTRACK) with music by Drum & Lace and Ian Hultquist is available now exclusively on Apple Music and iTunes.   The album features music from Apple Original “Dickinson,” starring Hailee Steinfeld as poet Emily Dickinson in a darkly comedic coming-of-age story.  All episodes of “Dickinson” will debut exclusively on Apple TV+, a new home for the world’s most creative storytellers, on November 1.

“Getting the chance to score Emily Dickinson’s world was really exciting to us from the start, as what Alena Smith (creator, showrunner and executive producer) has created with this show is really special and unique,” say composers DRUM & LACE and IAN HULTQUIST of the soundtrack.  “Incorporating modern musical sensibilities against the contrasting setting of the 1850s was a thrilling challenge, and we had a fun time pulling it together. For the score, we were inspired by legendary performers such as The Prodigy and Missy Elliott, but also gave nods to the current musical landscape with artists like Billie Eilish and Lizzo. The use of vocals in the score gave us a way to tap into Emily's mind and externalize her thoughts and struggles through music.”

ABOUT DRUM & LACE... is an Italian composer, sound artist and performer that writes and creates music for film and media. Raised in Florence, Italy she received her Undergraduate Degree from Berklee College of Music in Film Scoring & Composition and a Master’s Degree in Music Technology & Composition from New York University.

Inspired by interesting sounds and cinematic elements, Drum & Lace melds together sampled field recordings and lush layers of synths to create densely textural and beat-heavy music, greatly drawing from film music, music concrete and modern electronica. Her ambient and chamber work also gathers great inspiration from nature and natural sound, as well as the juxtaposition of unlikely sounds with one another.

ABOUT IAN HULTQUIST... is an American composer & producer based in Los Angeles, CA. Over the past few years, he has made a name for himself composing the scores for numerous films, documentaries and TV shows. He started his career in music as a founding member of the band Passion Pit, which started in Boston, MA where he was studying Film Scoring at Berklee College of Music. He spent many years touring around the world & honing in his productions skills as a Music Director, and working on remixes for artists such as Portugal the Man, Imagine Dragons, Tegan & Sara and OK GO.