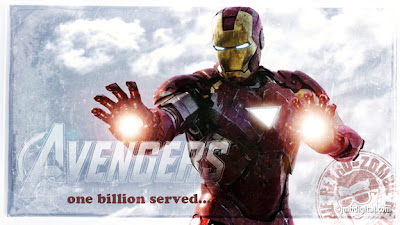 The Avengers Reaches $1 Billion Worldwide
by Ray Subers
http://boxofficemojo.com
With official grosses reporting on Monday, it's official—The Avengers has joined the fabled $1 billion worldwide box office club. The movie reached this level on its 19th day in theaters, which ties the record-breaking pace of Avatar and Harry Potter and the Deathly Hallows Part 2 (though The Avengers was only playing in the U.S. for ten of those days). It currently ranks 12th on the all-time worldwide chart with $1.000.4 billion, and by the end of next weekend it will move up to fourth place behind Avatar, Titanic and Deathly Hallows Part 2.
"We're obviously thrilled with the global success of The Avengers," said Robert Iger, Disney's Chairman and CEO, in a press release. "It's a fantastic movie and an extraordinary franchise that will continue with more great stories and compelling characters for years to come."
The Avengers is Disney's fifth billion-dollar movie following Pirates of the Caribbean: Dead Man's Chest ($1.066 billion), Toy Story 3 ($1.063 billion), Pirates of the Caribbean: On Stranger Tides ($1.044 billion) and Alice in Wonderland ($1.024 billion). No other studio has more than two billion-dollar movies.
Across its 54 markets, The Avengers added $93.8 million this weekend to bring its foreign total to $627.3 million. That's the highest overseas gross ever for a comic book adaptation, and it ranks 16th among all titles. The movie's top market so far is the United Kingdom with $65.1 million, and China ($50.4 million), Mexico ($49.6 million), Brazil ($44.4 million) and South Korea ($41.5 million) make up the Top Five. It's only major market remaining is Japan, where it opens in August, and there's a good chance The Avengers ultimately winds up close to $800 million in overseas revenue.
Hosted by Unknown at 2:01 AM

At this pace, it might overtake Titanic but I doubt it will top Avatar.

This does not surprise me... especially since most people I know have gone to watch it twice at the movies... it's a great movie.