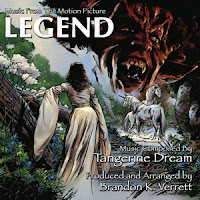 
LEGEND is a visually stunning fantasy/adventure that takes place in a mythical forest inhabited by fairies, goblins, unicorns and mortals, where an epic battle of Good versus Evil begins to unfold. Tom Cruise plays Jack, a peasant boy in love,  perhaps tragically, with the beautiful princess Lili (Mia Sara). Jack and Lili become pawns in a much larger game as the Lord of Darkness (Tim Curry) exploits their relationship to reveal the location of the remaining members of the purest race in the world, the last pair of Unicorns. He dispatches his goblins to kill the Unicorns and claim their horns, so that he may claim their mystical power and bring about an everlasting age of Darkness. Jack finds himself forced to undertake a quest, to save Lili, try to prevent the death of the last Unicorn and defeat the plans of the Lord Of Darkness, or the sun will rise no more.
This is a wonderful release it has always been one of my favorite scores and with very uplifting songs that made this one tough find in the collecting world. Brandon K. Verrett captures the mood and the essences in every note, it's like listening or seeing the film for the very first time. The whole package from score to design is just amazing and you too can relive your fantasy just by opening your ears.
-Jeremy [Retro-Zombie]
------------------------------
Hosted by Unknown at 2:02 AM

I've heard both scores and have to admit I like the Tangerine Dream one better. Probably because it was the one I heard for years before catching the European cut.