Tied In Blood: A Bone Chilling Ghost Story
Tied in Blood is an unsettling tale of evil and manipulation, of courage and redemption. Returning home, a father is horrified to find his wife and children dead: killed, he claims, by an evil spirit that haunts their home. Insisting that a ghostly presence killed them he asks a gifted spiritualist, Robert Brandon, to find the paranormal killer but as the dead return to tell of ghosts, demons, seduction and murder, Robert discovers a horror more real than any ghost story. He communicates with the deceased to piece together the family's darkest secret, untangling lies and confusion, he becomes a target for the very darkness that tore the family apart. 6.5/10 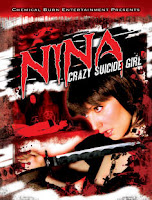 NINA - CRAZY SUICIDE GIRL
In a seemingly commonplace Italian province, someone is preying on gorgeous, young models. A cult of satanic psychopaths needs their untainted blood to satisfy the unrelenting appetites of their pagan gods. Nina, a bounty hunter, is enlisted to look for the unsuspecting young ladies who have been caught in the net of this group of depraved cult fanatics and the perverse priest leader who is searching for supreme occult power. As she drowns in the underworld of porn producers, satanic cults and common criminals, her Japanese katana leaves behind a devastating trail of blood and tears. Nina is on a mission, repulsed by the horrible crimes, she will slice, slay and mutilate everything and anything that gets in the way of justice. Not for the faint of heart, Nina depicts an underworld of deprivation by mixing Asian movie influences with Tarantino's pulp cinema, and extreme Italian cult movies from the ‘70's. Nina - Crazy Suicide Girl, is an adrenaline pumped film that reeks of Sex, Magic and Gore. 4.5/10
http://chemicalburn.org
Hosted by Unknown at 2:02 AM