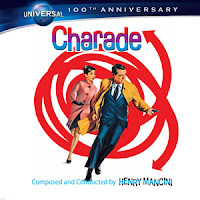 With this premiere release of the original film recording of Henry Mancini's score to the 1963 film Charade, Intrada helps Universal Pictures celebrate their centennial with one of Mancini's most famous film scores.  Scored in the same period as Hatari!, Breakfast at Tiffany's and The Pink Panther, Mancini was able to turn out another hit tune —both instrumental and song versions (with lyrics by Johnny Mercer) of his main theme that made the Billboard charts. And the film offered ample opportunity for pop and novelty source music, most of which found their way onto Mancini’s original re-recorded Charade album.

That left Mancini’s dramatic underscore MIA—and as this new album shows, the composer’s genuine film music is every bit as distinctive and entertaining as his pop tunes. Playing against Maurice Binder’s whirligig animation patterns, Mancini’s main title tune for cimbalom over Latin percussion rhythms establishes a mood of mystery and intrigue before strings sweeten it into pure romance. Mancini’s melody plays as a wistful, lonely love theme at several points in the film, providing a common thread throughout the score.

For this album, Intrada had access to the complete mono elements stored in Universal's vaults. The elements were in perfect condition providing a crisp and detailed sound.

Charade places the glamorous duo of Audrey Hepburn and Cary Grant in Paris, in the middle of a suspenseful, romantic mystery. Hepburn plays Regina Lambert, a bored Parisian wife unhappy with her diplomat husband— until she returns home from a vacation to find he’s been killed. Grant is Peter Joshua, a handsome British agent who wants to help Regina unravel the mystery of her husband’s death—or does he? It turns out the late Mr. Lambert stole a quarter of a million dollars from a WWII payroll and now his three menacing accomplices (played by Ned Glass, George Kennedy and James Coburn) are convinced Regina knows where the money is hidden. Just whose side is Joshua really on? 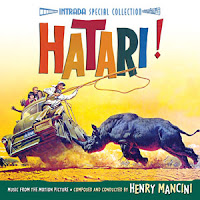 Along with Breakfast At Tiffany’s, The Pink Panther and Charade, Hatari! is generally regarded as one of Henry Mancini’s all-time most popular film score recordings. In fact, Hatari! ushered in the legendary “Baby Elephant Walk,” a swaggering tune for clarinet with orchestra written for the movie that instantly became a wildly popular hit on its own. In addition to their lofty commercial success, another thing these albums had in common was in how they represented their respective scores. In each case, Mancini re-recorded roughly a half hour of music, adapting the major themes and easy listening-style music into albums accessible to wide audiences. The actual film soundtracks, including the more dramatic underscoring, were never made available. With this premiere release of the film soundtrack to Hatari!, Intrada presents to new audiences the complete score as Mancini actually recorded it for the film, including the original version of “Baby Elephant Walk,” heard both in its familiar setting for the parade of elephants scene and in dramatic variations for the final chase sequence.

Hatari! was recorded on stereo three-track 35mm magnetic film in 1962, the majority of which were transferred by Paramount onto 2’’ archival tape in the 1990s. To present the complete score, restoration engineer Chris Malone has added otherwise unavailable cues from several additional sources.

John Wayne stars as Sean Mercer in this African adventure, searching the African landscape for wild animals to fill zoo orders.  Mercer's group includes "the Indian" (Bruce Cabot), a womanizing sharpshooter who is gored by a rhino.  While the Indian is in the hospital, a named Swiss zoo photographer Anna Maria D'Allesandro (Elsa Martinelli) shows up  -- and Mercer tries to send her packing from day one.  More trouble with rhinos ensue, and D'Allesandro starts collecting baby elephants along the way, giving Mercer much more than he bargained for.