Joe Versus The Volcano [2002] - Georges Delerue 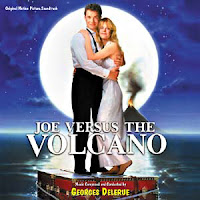 
When a hypochondriac learns that he is dying, he accepts an offer to throw himself in a volcano at a tropical island, and along the way there, learns to truly live.
This is a the score to a very underrated film by the great composer Georges Delerue and I am happy to be able to add this to my collection. It has been out of print for some time now, but I finally was able to find it... What you may not be aware of is that Varese Sarabande has been releasing scores for over thirty wonderful years and feature some of the greatest scores/soundtracks. Some are released as Club Titles, this month they are beginning to re-release some of their greatest titles and many that are out of print.
-Jeremy [Retro-Zombie]
------------------------------------
Hosted by Unknown at 2:02 AM