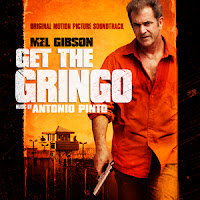 
Get The Gringo an Icon Production starring Mel Gibson, is an explosive action film infused with dark comedy directed by Adrian Grunberg and produced by Mel Gibson, Bruce Davey and Stacy Perskie. The soundtrack features original music by Antonio Pinto with songs by Ten Years After and Los Fabulosos Cadillacs.
Okay, Gibson may be having some personal life altering problems, this not change that he is still a talented actor for over three decades. So having said that this score has a very strong Spanish influence, but the title gives that away so no secret there. Antonio Pinto tells his story in a tender yet sparks of flashing lights and guitar strength that makes the whole score work. Add the few tracks from Ten Years After and Los Fabulosos Cadillacs... you will feel the same I did, satisfied.
Let's Give Mel Gibson a break, what do you need another Lethal Weapon?
-Jeremy [Retro-Zombie]
---------------------------------
Hosted by Unknown at 2:01 AM