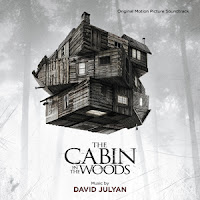 
If you think you know this story, think again.  From fan favorites Joss Whedon (Buffy The Vampire Slayer and Firefly) and Drew Goddard (Cloverfield) comes THE CABIN IN THE WOODS, a mind-blowing horror film that turns the genre inside out.  Starring Kristen Connolly, Chris Hemsworth, Anna Hutchison, Richard Jenkins, and Bradley Whitford.
This film "The Cabin In The Woods" finally gets the full release and Varese Sarabande gets the honor to release and what a fine release it is. David Julyan has composed several horror scores and knows how to push our inner scare button... does it well. It is dark at times on top of very elegant... but don't sit back as it builds to what you want and that is to be terrified. Screaming strings and crashing cymbals starts to ring in your head as you wonder if you also might be stuck in the cabin in the woods.
-Jeremy [Retro-Zombie]
------------------------------------
http://www.discoverthecabininthewoods.com/
Hosted by Unknown at 2:01 AM