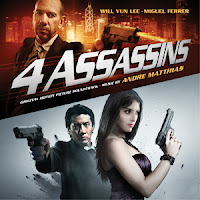 
A winner of six awards at the Action on Film International Film Festival in 2011, 4 Assassins is a tense drama with action elements starring Miguel Ferrer (Traffic, RoboCop, Mulan) and Will Yun Lee (Die Another Day, Total Recall, Elektra). The music is written by German composer Andre Matthias, who in director Stanley J. Orzel’s words uses “haunting flutes, stirring strings and deep percussion to heighten the characters’ expressions and reflections”. The score combines traditional Western musical semantics with Asian influences as the film takes place, and is produced in Hong Kong. The soundtrack also features the end title song “Like Ashes” by Mad Carousel. 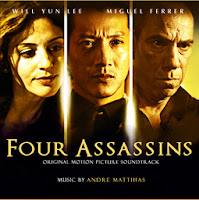 Our digital release co-insides with the North American DVD release of the film. A limited physical (CD) release of the album is available from Kronos Records.

5/5 You cannot go wrong on this score, it looks sleek, it is sleek and it's that one you will enjoy... I am not to familiar with Andre Matthias' work... but I am going to find out more. Great Job!
-Jeremy [Retro-Z]