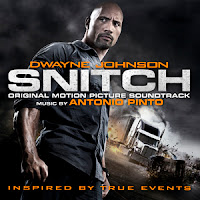 
In the fast-paced action thriller Snitch, Dwayne Johnson stars as a father whose teenage son is caught in possession of a package that, unbeknownst to him, contains enough narcotics to warrant a mandatory minimum prison sentence of 10 years.  Desperate and determined to rescue his son at all costs, he makes a deal with the U.S. Attorney to work as an undercover informant and infiltrate a drug cartel on a dangerous mission – risking everything, including his family and his own life.  The film is directed by Ric Roman Waugh from a script written by Justin Haythe and Ric Roman Waugh.

5/5 It's a great piece it took me in a different direction musically, you think by the trailer and the promotional art it was going to be a bombastic score... I found it to be much more of a powerful journey.
-Jeremy [Retro-Z]
Hosted by Unknown at 12:30 AM