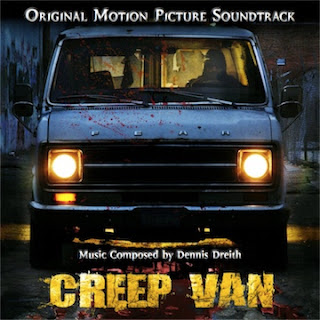 The second feature by the filmmakers, who brought you the nightmarish "Gag", again features a score by Dennis Dreith, probably best known for his music to the Dolph Lundgren actioner "The Punisher". Not nearly as dark as "Gag", "Creep Van" features a wide range of music, from rock to surf to sitar to heart pounding horror and a killer End Credits song by Brian Stewart (Harley Krishna from the "Gag" soundtrack), who co-composed some of the tracks.

The movie already sold 20,000 copies in WalMart stores around the country, so make sure you get your copy of the soundtrack.

Limited to 500 copies. The first 30 copies will be signed by the composer.
-Jeremy [Retro-Z]
Hosted by Unknown at 8:57 AM