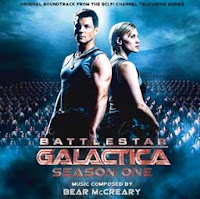 "In scoring the Battlestar Galactica prequels Caprica and Blood & Chrome, I returned to the unique combination of world and orchestral sounds that defined my previous score,” McCreary described. “But, both prequels had their own distinct approach. Caprica was interlaced with delicate chamber orchestra textures, solo harp and other-worldly source songs. Blood & Chrome is energized by heavy distorted-synthesizers and searing electric guitar performances. Listeners will hear, however, that all three series have a common musical DNA."

Battlestar Galactica: Blood & Chrome (a prequel to the critically acclaimed hit series, Battlestar Galactica) takes place in the midst of the First Cylon war. As the battle between humans and their creation, the sentient robotic Cylons, rages across the 12 colonial worlds, a young, talented fighter pilot, William Adama (Luke Pasqualino), finds himself assigned to one of the most powerful battlestars in the Colonial fleet: the Galactica. Full of ambition and in pursuit of the intense action that the Cylon war promises, Adama quickly finds himself at odds with his co-pilot, the battle-weary officer Coker (Ben Cotton). With only 47 days left in his tour of duty, Coker desires an end to battle just as much as Adama craves the start of it. Though they clash at first, the two men forge an unlikely bond when a routine escort mission with an enigmatic passenger (Lili Bordan) turns dangerous and becomes a pivotal one for the desperate fleet.

Blood & Chrome is the second prequel from the re-imagined Battlestar Galactica series. The first was Caprica, which aired from 2009-2010. Though it only lasted one season, the series and its music cultivated their own loyal following.

“The Caprica series soundtrack was made possible by the tireless enthusiasm of the series' passionate fans,” said McCreary. “After countless Tweets, Facebook posts, emails, questions and rants, fans made it clear they wanted to experience this music in album format. I am thrilled to collaborate once again with La-La Land Records to release more music from the Battlestar Galactica universe."

Bear McCreary's unique combination of atypical instrumental background (he is a professional accordionist) with rigorous classical training prepared him to compose for disparate genres. By the age of 24, McCreary was launched into pop culture history with his groundbreaking score to SyFy’s hit series Battlestar Galactica, for which he composed “the most innovative music on TV today” (Variety). It “fits the action so perfectly, it’s almost devastating: a sci-fi score like no other” (NPR). Io9.com declared Bear McCreary one of the Ten Best Science Fiction Composers of all time, listing him alongside legends John Williams, Jerry Goldsmith and Bernard Herrmann.
McCreary continues to write for the television show The Walking Dead. In 2013 he will lend his talents to SyFy and Trion World’s groundbreaking entertainment experience, Defiance, a combined launch of a MMO videogame and television series as well as Da Vinci’s Demons, a bold new historical fantasy series from David S. Goyer (co-writer of The Dark Knight trilogy) for STARZ. His upcoming film projects include Europa Report and Knights of Badassdom. His other credits include critically acclaimed scores for series such as Terminator: The Sarah Connor Chronicles, Eureka and The Cape. His swashbuckling score for Human Target featured the largest orchestra ever assembled in the history of series television and earned him his first Emmy nomination. His videogame credits include SOCOM 4 and Dark Void.

Battlestar Galactica: Blood & Chrome, can be watched as twelve 10-minute webisodes on Machinima.com and will air as a two-hour movie on Syfy on February 10, 2013. The DVD, BluRay, and digital download will be released on February 19, 2013.