Intrada: ESCAPE FROM ALCATRAZ / HELL IS FOR HEROES 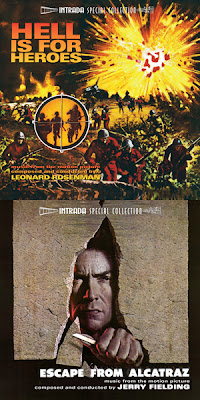 ESCAPE FROM ALCATRAZ / HELL IS FOR HEROES
Music by:  Leonard Rosenman / Jerry Fielding


World premiere of two dramatic soundtracks to Paramount films directed by Don Siegel. Appearing first is brief score by Leonard Rosenman for intense, highly regarded WWII action film HELL IS FOR HEROES starring Steve McQueen, Bobby Darin, Fess Parker. Rosenman launches with one of his most exciting "Main Title" sequences of his career, then settles in for closer look at psychology of men in war. Intrada presents complete score in stereo from original three-channel scoring session masters. Second up is longer, highly complex score by Jerry Fielding for Clint Eastwood prison picture ESCAPE FROM ALCATRAZ. Combination of director Siegel, star Eastwood, composer Fielding guarantees success, this one is no exception. Deliberate movie allows composer to examine confined spaces, cold conditions of containment through use of 'musique concrete' techniques. As Fielding described score in 1979 lecture: "It's all hardware... steel on steel... it's Alcatraz.