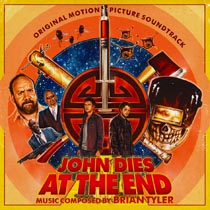 
It's a drug that promises an out-of-body experience with each hit. On the street they call it Soy Sauce, and users drift across time and dimensions. But some who come back are no longer human. Suddenly a silent otherworldly invasion is underway, and mankind needs a hero. What it gets instead is John and David, a pair of college dropouts who can barely hold down jobs. Can these two stop the oncoming horror in time to save humanity? No. No, they can't. Written by David Wong

5/5 It is no secret that I am a huge fan of Brian Tyler's work, what you may not know that he has teamed up with Don Coscarelli director of the film Phantasm. They both worked together on a film that starred Bruce Campbell called "Bubba Ho-tep" and it's that that makes me a fan. It's a great fun trip into the minds of these two talented minds... welcome the journey.  Well in my mailbox there it was, the new release from one of my favorite labels, composers and directors... JEALOUS?

Next to see the film, then a check on my film bucket list!
-Jeremy [Retro-Z]