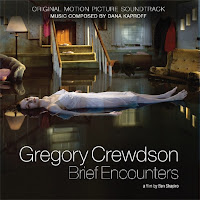 An acclaimed photographer with the eye of a filmmaker, Gregory Crewdson has created some of the most gorgeously haunting pictures in the history of the medium. His meticulously composed, large-scale images are stunning narratives of small-town American life—moviescapes crystallized into a single frame.

5/5 This a very peaceful journey that Dana Kaproff is taking us on subtle tones of piano work, you won't feel overwhelmed... just relaxed. Some great work here!