UNIVERSAL SOLDIER: DAY OF RECKONING...This movie is on drugs! 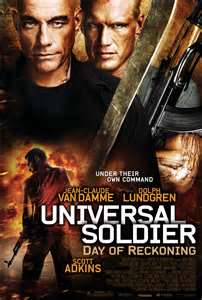 Finally after following the production of this film for like two years I am able to watch DOR.  I don't have On-demand and it never played in any theaters near where I live so I had to wait for it on Blu.  It was worth the wait.  Now I really can't write about this film without spoiling a majority of what happens in the film so be warned.  Spoilers ahead.  I will say this.  DOR is one trippy action film.  This isn't your typical finger/toe chopping, bat bludgeoning, machete hacking shoot'em up.  This film will make your head hurt.  Beware the white flashes!

The awesome Scott Adkins stars as John whose family was murdered by Luc played by Jean-Claude Van Damme.  Since REGENERATION JCVD has escaped the government and has become Marlon Brando in APOCALYPSE NOW.  He has gone up river into hiding converting other Universal Soldiers who are hunting him down.  He has a mind freeing injection he gives soldiers who are programmed as sleeper agents for the government.  When given the injection their vision strobes to white flashes causing the soldier to see the truth and the audience member watching too long at the screen to convulse on the floor uncontrollably and evacuate their bowels into their pants in front of their friends.  At least that is what happened to me.  Word of warning.  Don't stare at the screen too long when the strobing happens.  It will hurt your head.  The piercing sound effects don't help either.  Can't imagine what that would have looked like in 3D.  Absolute hell, I imagine.  JCVD plans on creating his own clone army to fight the government that created the Universal Soldier program.  Fight fire with fire.  That sort of thing.  John is given the injection but it does not work.  His memories help him resist which lead to occasional bizarre episodes of John seeing Luc in mirrors and such messing with his mind.  John has to take the journey up river to find Luc and ultimately himself.  How deep.  CLICK TO CONTINUE...

i am thrilled about this film, been enjoying these sequels for years!

I'm surprised. Considering how much older the actors are I thought it would be flat. Glad to know I'm wrong.