Monstrous Movie Music Has A Secret... I am willing to SHARE!


About Monstrous Movie Music: Our goal in this CD series is to re-record the scores from science-fiction, fantasy, and horror films of the past in a manner that's as faithful as possible to the original movie studio versions. Engineer, Hubert Geschwandtner

Rather than using standard classical microphone set-ups as if the music were written for the concert hall, we have close-miked the orchestra. This not only creates a more powerful and immediate sound consistent with the dramatic intentions of film music, but it also reveals additional instrumental detail.  Just as the visual nature of film demands close-ups, film music has similar requirements, such as when the drama dictates that a single oboe must dominate over the rest of the orchestra. 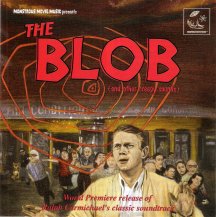 This is a great independent label of awesome score music, classic score music... I have enjoyed every note they have chosen to share. They bring you back into a world of music once forgotten, you should never forget... they respect and honor some of the great composers. I want to thank the people at Monstrous Movie Music for bringing those memories, great memories back to the world... I wish them years of success. I am proud to be able to call them friends and I will bring any new releases to your attention.

The music is so rich and lively!
Great stuff.
- Maurice