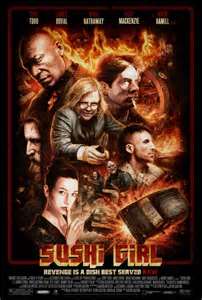 The best way to watch SUSHI GIRL is to go into it knowing as little as possible.  Let the story reveal itself through the progression of the movie's run time.  I say that because there really isn't much to this movie plotwise.  That is a good thing and a bad thing.  I like simple stories but by the end of this film I felt like I had seen all of this before.  That isn't to say SUSHI GIRL is terrible.  How could it be?  Look at that cast!  Tony (CANDY MAN) Todd, Mark (THE STAR WARS) Hamil, Michael (ALIENS) Biehn, Jeff (PLANET TERROR) Fahey, Danny (MACHETE...I guess) Trejo, Sonny (KILL BILL) Chiba and Atreyu from THE NEVERENDING STORY, Noah Hathaway all star or make cameos in this film.  I am just going to say that the makers of this film love Quentin Tarantino movies and eighties films.  Me too so I already know that I am going to like this movie.

I am not going to tell you what the story is about.  All I can say is that it is about a bunch of bad guys sitting around a table eating sushi off some naked chick and then a bunch of stuff happens.  I will say this.  SUSHI GIRL is wonderfully directed and never ever gets boring.  Every single person on screen is interesting and unpredictable and given a moment to shine.  Most of the characters are villains and you never know with villains how they are going to react.  That is why I love gangster films so much.  A gangster can be funny and charming and then all of a sudden without a moments notice they go off and kill somebody like it was nothing at all.  This movie is full of people like that.  Mark Hamil has been transformed into the dandy but vicious and sly Crowe.  He is really the star of this show.  You can't take your eyes off of him.  Hopefully a role like this that expresses his acting range will open more doors to his career.  No longer will he be known in as just Luke Skywalker.  The use of blood and gore is excellent as well.  The blood is dark and thick and it looks real and not C.G.I.  It perfectly amplifies the brutality and ugliness of these men and their actions.  The violence in this movie is heavy stuff.  It is not taken lightly.  Click here to continue reading the rest....