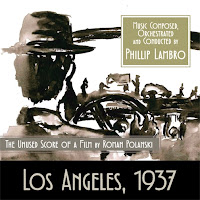 
Perseverance Records is releasing “Los Angeles, 1937,” the unused score by Phillip Lambro from Roman Polanski´s movie “Chinatown” (1974), starring Jack Nicholson and Faye Dunaway. For reasons explained in the extensive liner notes by film music writer Gergely Hubai, the soundtrack was ultimately rejected by Paramount. Now, this score is available for the first time – and on Perseverance Records exclusively.

5/5 Are you a fan of Chinatown, right who isn't... now imagine every aspect of this film shared, well that is what you are getting here a hidden gem by Phillip Lambro. This is the unheard dialogue from Gittes to the director to the screen, why it is so important to hear... it's really good. Lambro captures the idea and if you close your eyes... imagine your favorite scene, you can hear this score playing in the seedy side of Chinatown. It's classic and it's part of a cinematic history... it will find you being catapulted to 1937 Los Angeles.
-Jeremy [Retro-Z]
Hosted by Unknown at 12:00 AM