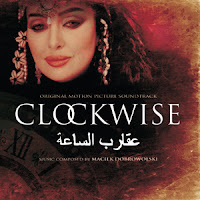 
Clockwise tells the story of Saad Ben Khalaf, a singer/drummer who sells old watches in Souk Wakef in the center of Doha, the capital of Qatar. Saad had a troubled childhood: he is an orphan rescued from a shipwreck, which was crushed in a devastating storm. As the only survivor of the tragedy, Saad was found and raised by Atique Ben Barud, who knows all too well how it feels to be the last of his kind. Atique was one of the three men who learned the forbidden art of Fijiri and is the only one who could still share the secret if he weren’t killed immediately. Through one of the magical watches in his collection, Saad take a trip back to the 1930s where he learns about his stepfather’s secret and also falls in love with Jeena, a beautiful female jinn who may be able to lift the curse on Atique.

5/5 So far there have been some great score releases in the new year of 2013, I am going to say this is one of my favorites. It's sweeping melodies... gliding you to a faraway place a wondrous. Maciek Dobrowolski keeps this score moving from track to track I am new to his work, I will keeping my eye on his musical talents. For More: http://mdobrowolski.com/
-Jeremy [Retro-Z]
Hosted by Unknown at 1:00 AM