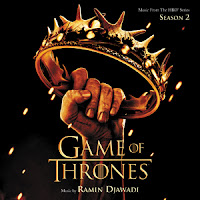 
The cold winds are rising.  Storms come and go.  The big fish eat the little fish.  Sometimes those with the most power have the least grace.  The war of five kings … nothing matters but how it ends.

HBO’s phenomenally successful Emmy award-winning adventure series based on George R. Martin’s fantasy A Song Of Ice And Fire is back for a highly anticipated second season of political and sexual intrigue in the mythical land of Westeros — featuring returning cast favorites Peter Dinklage (Emmy award winner, Best Supporting Actor), Kit Harington, Emilia Clarke, Lena Hedley, and Nikolaj Koster-Waldau.
Okay... Ramin Djawadi does it and does it strong with power themes and embience that will do the second season of HBO's "Game Of Thrones". One song from the group "The National" called "Rains Of Castomere" is very moody, but fits to the whole score nicely. His work on the first score was great, so in my words you don't break what isn't broken... Nice Job!
-Jeremy [Retro-Zombie]
--------------------------
Hosted by Unknown at 2:02 AM