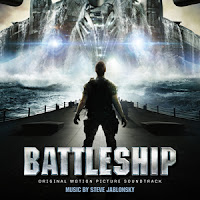 
Peter Berg (Hancock) produces and directs Battleship, an epic action-adventure that unfolds across the seas, in the skies and over land as our planet fights for survival against a superior force. Based on Hasbro's classic naval combat game, Battleship stars Taylor Kitsch as Lt. Alex Hopper, a Naval officer assigned to the USS John Paul Jones; Brooklyn Decker as Sam Shane, a physical therapist and Hopper's fiancée; Alexander Skarsgård as Hopper's older brother, Stone, Commanding Officer of the USS Sampson; Rihanna as Petty Officer Raikes, Hopper's crewmate and a weapons specialist on the USS John Paul Jones; and international superstar Liam Neeson as Hopper and Stone's superior (and Sam's father), Admiral Shane.
Steve Jablonsky is one of the new breed of composers that will rock the world's ear, as each new score is released. He is old school with a modern spin as he will pay homage to the masters, while putting a edge to his own work. I am not sure about this film "Battleship" because they have to make you see Rhianna in the trailer from artist to actress. That is what bothers me about the trailer, I really don't understand her career and media attention. Some of you might like her style, I just don't get it... but I am one opinion. Here in this place we talk about the music and when we talk music we are talking about the talented Steve Jablonsky. So if you like his music from "Transformers" to "Gears Of War II"... you will enjoy "Battleship".
-Jeremy [Retro-Zombie]
-----------------------------------------
Hosted by Unknown at 2:02 AM