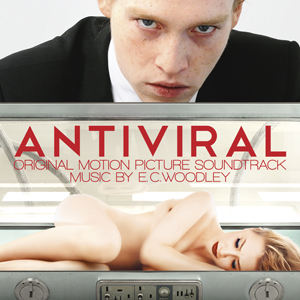 
(May 1, 2013– Los Angeles, CA) – Lakeshore Records will release the Antiviral – Original Motion Picture Soundtrack digitally on May 21, 2013.  Antiviral was written and directed by Brandon Cronenberg and debuted at Cannes in 2012.  E.C. Woodley (Rhinoceros Eyes, The Dark Hours) composed the original score.

“One point of universal consensus, wherever I go, is that the score by E.C. Woodley is extremely good,” said the film’s writer/director Brandon Cronenberg. “Eric and I went through the film from start to finish, discussing what the music should accomplish in both theoretical and specific terms. We decided given the subjective nature of the story that it should be consistently internal, reflecting what was going on in the protagonist’s head rather than what was going on around him. It should be something bodily, sometimes an elevated pulse, sometimes an expression of pain or sickness or bliss.”

IFC Films presents Antiviral, in theaters, VOD, and digital April 12, 2013.  The Antiviral – Original Motion Picture Soundtrack will be available digitally on May 21, 2013.

Recent work includes music score for several films including Tennessee directed by Aaron Woodley and produced by the Academy Award winning producer/director Lee Daniels; the anthology film Toronto Stories; Cleopatra by the legendary director, Julio Bressane, one of the pioneers of the Brazilian Novo Cinema Novo; and Rhinoceros Eyes, winner of the Discovery Prize at the Toronto International Film Festival.

An impressive resume and that album cover is inventive.