BuySoundtrax Records: MUSIC FROM THE FILMS OF RIDLEY SCOTT 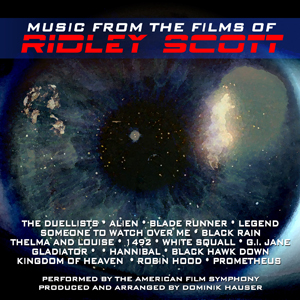 BUYSOUNDTRAX RECORDS
TO RELEASE MUSIC FROM
THE FILMS OF RIDLEY SCOTT

(May 13, 2013) – BuySoundtrax Records is proud to announce the release of Music From the Films of Ridley Scott, available digitally on May 14th and, in stores and from www.buysoundtrax.com on May 27, 2013.  The recording was produced and arranged by Dominik Hauser, performed by the American Film Symphony, and features performances by Brandon K. Verrett and Edgar Rothermich.

Ridley Scott has produced some of the most critically acclaimed, commercial successes, and beloved films of the past 35 years.  From his 1979 breakthrough, Alien, to the cult classic Blade Runner, to his three Academy Award nominations (Thelma and Louise, Gladiator, Black Hawk Down), Scott’s films have run the gamut, set in the past, present and future.

One thing is constant in the works of Ridley Scott – he has worked with some of the best-loved composers of his time, including Jerry Goldsmith, Hans Zimmer, Vangelis, Trevor Jones, and more recently Harry Gregson-Williams and Marc Streitenfeld.

Originally from Switzerland, Dominik Hauser received his education at the Jazz School St. Gallen in Switzerland, earning a masters degree in music. In 1996 Hauser relocated to Los Angeles, to attend UCLA where he delved deeply into film scoring. Subsequently he took his skills to the realm of indie cinema and began composing for film. Hauser’s work involves him in a variety of projects, including cinema, theater and video games. Recently Hauser completed arranging and orchestration on the restoration of the first Best Picture Academy Award® winner Wings for the 2012 Paramount Picture centennial celebration. His work for the record label BSX includes The Bounty, Scrooge, Dr. Jekyll and Mr. Hyde. Hauser recently published his fourth book, Soloing for Bass.