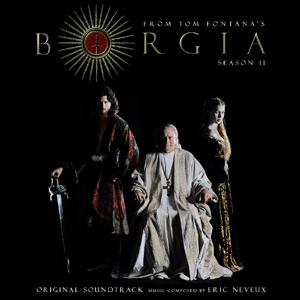 
Composer Eric Neveux’s subtle yet powerful, melody saturated soundtrack to the hit Netflix TV series Borgia. Created by Emmy award winning writer Tom Fontana (Homicide: Life On The Street, Oz) and starring John Doman (The Wire, Damages), Borgia is the story of the dynasty that rose to hold sway over the whole world. Set in a cauldron of intrigue, violence, murder, lust, politics, faith, incest, betrayal and redemption, the series can be seen in close to 90 territories including the UK and US.

With a nod to the beautiful freakiness of Carter Burwell, eccentricity of Danny Elfman and symphonic sound of William Walton, Eric Neveux’s music voice is both distinct and singular. In Borgia, Neveux has created a score that is, at once reverent yet original, operatic yet intimate. Eric Neveux’s credits span 70 film and TV productions, and include a long working relationship with director Patrice Chéreau, for whom he provided scores for the critically acclaimed Intimacy and Persecution.


You can watch the Eric Neveux video interview here:
ONE CLICK AWAY...