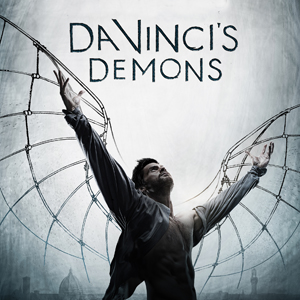 McCreary’s sweeping orchestral score was meticulously researched to accurately represent the time period, without being bound to it.  His score combines full orchestra, Renaissance instrumentation, choir and ethnic soloists with the renowned Calder Quartet and surging contemporary synthesis.

“For Da Vinci's Demons, I looked to the real-life Leonardo for inspiration.  He famously wrote backwards and forwards, so I decided to do (try) the same thing with his theme!” said McCreary.  “It was a nice idea at the time, but proved rather difficult to produce anything with emotional meaning. It took a while, but ultimately, I think the end result works beautifully.  It's emotional, and fits Leonardo's character beautifully.  Yet, at the same time, it feels like a palindrome.”


It’s this sort of out-of-the-box thinking that led WIRED Magazine to call McCreary a “Secret Weapon” in a recent issue.  His unique combination of atypical instrumental background (he is a professional accordionist) with rigorous classical training prepared him to compose for disparate genres.  By the age of 24, McCreary was launched into pop culture history with his groundbreaking score to SyFy’s hit series Battlestar Galactica, for which he composed “the most innovative music on TV today” (Variety). It “fits the action so perfectly, it’s almost devastating: a sci-fi score like no other” (NPR).  Io9.com declared Bear McCreary one of the Ten Best Science Fiction Composers of all time, listing him alongside legends John Williams, Jerry Goldsmith and Bernard Herrmann.

McCreary continues to write for the television show The Walking Dead.  Recently he lent his talents to SyFy and Trion World’s groundbreaking entertainment experience, Defiance, a combined launch of a MMO videogame. His upcoming film projects include Europa Report, which will premiere at the Los Angeles Film Festival in June, and Knights of Badassdom.  His other credits include critically acclaimed scores for series such as Terminator: The Sarah Connor Chronicles, Eureka and The Cape. His swashbuckling score for Human Target featured the largest orchestra ever assembled in the history of series television and earned him his first Emmy nomination.  His videogame credits include SOCOM 4 and Dark Void.

Writer / director David S. Goyer’s historical adventure series Da Vinci’s Demons, premiered on STARZ on April 12th, and was renewed by the network for a second season the very next day. The secret history of Leonardo Da Vinci's tantalizing life reveals a portrait of a young man tortured by a gift of superhuman genius. He finds himself in a conflict between truth and lies, religion and reason, past and future. His aspirations are used against him by the opposing forces of the time—luring him into a game of seduction where those who despise his intellect need him most.

“Da Vinci’s Demons is my first historical drama, and as such, needed a slightly different approach,” said McCreary.  He researched instruments of the period, including the viola da gamba, violone, crumhorn, shawm, lutes, natural trumpet and hurdy gurdy.  “You may have never seen or even heard these instruments before, but when they play historically accurate arrangements, with proper intervals and chord voicings, the sound is unmistakably Renaissance.  Music history buffs will probably freak out when they catch all the little Easter Eggs I’ve hidden in the score, but everyone else will at least recognize an old-world authenticity that helps them feel like they’re watching a story that takes place in the fifteenth century.”

Other upcoming releases from Sparks & Shadows include McCreary's soundtracks for the multimedia science fiction epic Defiance, both for the television series (SyFy) and the MMO shooter game (Trion Worlds).  This summer, the label will also release McCreary's score for the feature film Europa Report (Magnet), a science fiction thriller that explores the first manned mission to Jupiter’s mysterious moon, Europa.

I adore the show with it's gorgeous imagery and entertaining history lessons, if a bit askew. I will have to pay more attention to the score while watching tonight.

I too adore the show and the music in it is extremely clever and lovely, especially the opening theme which describes Leonardo in such a deep way