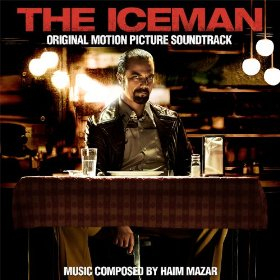 
Inspired by actual events, The Iceman follows notorious contract killer Richard Kuklinski (Academy Award® nominee Michael Shannon) from his early days in the mob until his arrest for the murder of more than 100 men. Appearing to be living the American dream as a devoted husband and father; in reality Kuklinski was a ruthless killer-for-hire. When finally arrested in 1986, neither his wife nor daughters have any clue about his real profession.

Co-starring Academy Award® nominee Winona Ryder (Black Swan) and Chris Evans (Avengers, Captain America), The Iceman is directed by Ariel Vromen (Danika) from a script he wrote with Morgan Land (Rx). Ray Liotta (Goodfellas), David Schwimmer (Friends), Robert Davi (Profiler) and Danny Abeckaser (Alpha Dog) round out the cast. The film features cameo appearances by Stephen Dorff (Public Enemies) and James Franco (127 Hours).
I just saw the trailer for this and now the score is available... I am entertained, yet not seeing the film yet I am not sure how it fits. So my thoughts are purely on the score itself, I am feeling a loneliness vibe that quickly turns to a thriller. Giving us the taste of what the Iceman has to endure.
-Jeremy [Retro-Z]