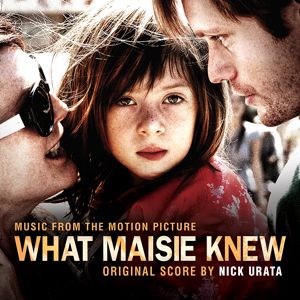 Unnerved by the prospect of middle-aged stasis and drawn to other lovers, the couple eventually divorces. Maisie (Onata Aprile), their only child, is caught in the middle of it all, a flesh-and-blood bargaining tool who winds up being shuttled back and forth between her parents as they each attempt to start their lives afresh with new partners (Alexander Skarsgård and Joanna Vanderham).

Quietly precocious and a keen observer, Maisie begins to understand how essentially selfish, irresponsible and damaged her parents really are. With time their new relationships disintegrate as well, and Maisie is forced to consider whether or not she should try to construct for herself a whole new family.


What Maisie Knew had music at its heart from the start. It’s a film about the neglected six-year-old daughter of a rock musician, so some of the first questions we faced were about the rock-and-roll world of the story: what did Susanna Nunn’s music sound like? Who were her fans? Who was in her band? How did she dress? How run-down was her tour bus?

After a bit of exploration, we got into a conversation with The Kills’ Jamie Hince and Alison Mosshart, and they very generously allowed us to use a couple of their songs to build Susanna’s world around. Before production began, we took Julianne Moore (an avowed “non-singer”) to see The Kills perform. Watching her watch the band was incredible: she couldn’t take her eyes off Alison. Over the next several weeks, she worked on learning the songs, and we pulled together a stage band for her “live show.” Filming that live show at Webster Hall was both a lot of fun, and kind of funny, too. Julianne was understandably anxious about the whole thing--the singing in general, the strutting and posturing--and after the first full take, she turned to us and said something like, “I feel like such a dork!” Everyone laughed, including Julianne. But the truth of it was that she was amazing, and the whole room was kind of rocking with her.

The film’s score needed to come from a completely different place. We still wanted a rock-and-roll vocabulary, but filtered (like the film itself) through 6-year-old Maisie’s experience and imagination. We needed music that could support the emotional nature of the story, but do it with the innocence and lightness that Onata Aprile brought to portraying the character of Maisie. We love the score that Nick Urata composed and performed. It’s lyrical but strong (like lots of Nick’s music); and it manages a sensitive attention to the needs of the storytelling while still pulsing with a musicality and tunefulness of its own. It feels like an essential and inevitable part of the movie to us now — like another voice in the story.