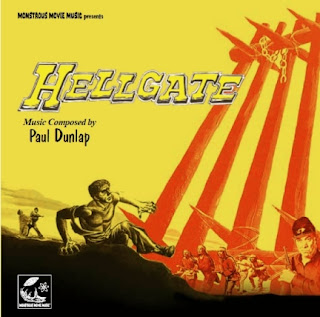 
Hellgate and Lost Continent [MMM-1972] presents the first film music album by the great Paul Dunlap, who is best known for his horror and sci-fi scores of the 1950s. Hellgate is a fabulous 1952 Lippert western, with a fine cast that includes Sterling Hayden, Joan Leslie, Ward Bond, and James Arness.  Everyone involved in this film rose to the occasion, and that included the composer, who wrote a powerhouse score capturing the drama and romance of this very moving post-Civil War tale.  About 35 minutes of the soundtrack survived on acetate recordings, and it’s an excellent introduction to Dunlap’s artistry, as it covers a wide range of of the prodigious composer's talents.

5/5  Much respect to this grand release it holds your attention as all of Dunlap's releases do from all of his collective works. Here we get a taste of more of two scores, I sometime feel that I enjoy this style of score... It fits a retro feel and you all know I am really a fan of this label and their achievements.
-Jeremy [Retro-Z]

Acetate? What a find! The sound quality is great considering. This is a great introduction to a composer I've never heard of.