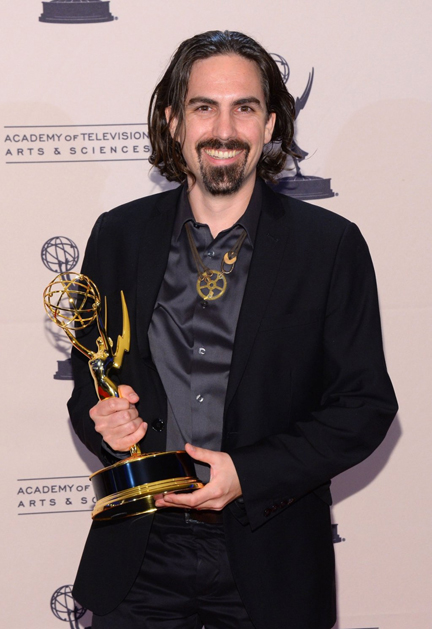 
(September 16, 2013 – Culver City, CA) On September 15, 2013, composer Bear McCreary earned his first Emmy® Award for the Main Title Theme for DA VINCI’S DEMONS at the Creative Arts Emmy Awards in Los Angeles. McCreary had been nominated one previous time in the same category for HUMAN TARGET.

“To be nominated alongside some of the most exciting composers working in the industry was, itself, a tremendous honor. I am totally overwhelmed by this win,” said McCreary.

McCreary credits his collaboration with show creator David S. Goyer as to what led to his first Emmy Award win.
“I must share this award with series creator David S. Goyer. When I played him my first demo for the main title, he gave me the greatest feedback a producer can bestow. He said the music was too short!” described McCreary. “The theme was so catchy, he wanted to hear more of it. So, he re-cut his first episode and nearly doubled the length of the Main Title sequence, giving me the opportunity to expand on my ideas. Now that the Main Title Theme and Main Title Design have both won Emmys, I think its safe to say that Goyer had the right idea!”

McCreary’s sweeping orchestral score for DA VINCI’S DEMONS was meticulously researched to accurately represent the time period, without being bound to it. His score combines full orchestra, Renaissance instrumentation, choir and ethnic soloists with the renowned Calder Quartet and surging contemporary synthesis.

“For DA VINCI’S DEMONS, I looked to the real-life Leonardo for inspiration. He famously wrote backwards and forwards, so I decided to do (try) the same thing with his theme!” said McCreary. “It was a nice idea at the time, but proved rather difficult to produce anything with emotional meaning. It took a while, but ultimately, I think the end result works beautifully. It's emotional, and fits Leonardo's character beautifully. Yet, at the same time, it feels like a palindrome.”

Congratulations to all, but a special win for our friend Bear McCreary!
-Jeremy [Retro]