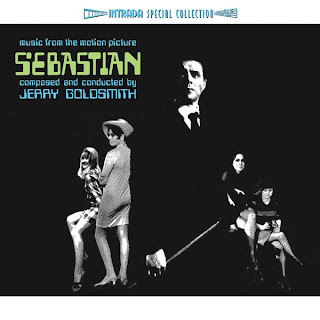 
For the 1968 film Sebastian, composer Jerry Goldsmith wrote one of his most charming and distinctive scores. Goldsmith was perhaps less known for comedies and while he had scored numerous films with romantic elements, Sebastian may have been his first out-and-out romance. Goldsmith responded to the challenge by creating a score that not only fully embraced the style of late 1960s pop music, but also reflected the mathematical sophistication of the character of Sebastian and his code-breaking work. Goldsmith took some inspiration from J.S. Bach and the Baroque musical era, an approach that was a perfect analogue to the intellectual exercise of translating coded language. As the film moves towards its suspense-driven climax, Goldsmith’s score leaves the romantic theme behind for moodier, more dramatic passages.

For 45 years the Dot Records LP has been the only way to hear this music. Although once thought lost, a lengthy search yielded the original three- and four-track session masters for the record album, which had been assembled in Hollywood in January 1968. While the Dot album was a brief 25 minutes in length, album producer Tom Mack managed to encapsulate all of Goldsmith’s thematic material. For this CD, a brand new two-track stereo mix was made, and the original album now appears complete—presented in crisp, beautiful audio (tracks 1–10). Premiering as tracks 11–32 is a program of Goldsmith’s chronological score as heard in the film itself, restored by from the monaural music stem.  The last 12 tracks of this album present the entire 18-plus minutes of variations of Tristram Cary's Sputnik Code material that he created using different mixes and recording speeds.

Dirk Bogarde starred as Sebastian, a mildly eccentric but brilliant cryptographer working for Britain’s chief of intelligence (John Gielgud) in London at the height of the Cold War. Sebastian attracts and oversees an army of 100 analysts—all women—who work under his direction breaking down Chinese and Russian codes. Impetuous Rebecca Howard (Susannah York) nearly runs down Sebastian on the Oxford campus one day, and Sebastian quickly tests her on her ability to rearrange words and letters. He then invites her to apply for a job. Romantic sparks begin to fly between Sebastian and Becky. When one of Sebastian’s veteran code breakers lets her leftist politics flag her as a security risk, Sebastian resigns and pushes Becky away—but a year later he’s called back into service to decode a vital enemy satellite broadcast, and in the process reunites with Becky.