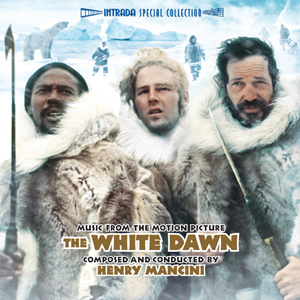 The White Dawn was a film composer’s dream because there were so many
open sequences, with no sound but the wind.
There was little dialogue, no cars crashing or people slamming doors
to get in the way of the music.  --Henry Mancini

For the 1974 Paramount film The White Dawn, composer Henry Mancini composed one of his most unique scores, creating an engrossing experience that is by turns both lyrical and savage. Woodwinds predominate, with flutes bringing an earthy, mystical quality. He uses reeds, often dissonant and coming from the orchestra’s lower register, to ominous effect. When bowed strings appear, they usually accompany the character of Daggett, emphasizing his romantic outlook on the world. Brass, when not in a seafaring vein, typically convey aggression and hostility. In addition to the ever-present drums, Mancini makes frequent use of mallet percussion, and enhances the score’s dreamlike character with electronics and instruments such as autoharp and waterphone.Two additional themes are of particular importance:the first is a gentle, almost childlike tune that seems to represent innocence and joy and the second is a fragile love theme.

For this release, Intrada had access to the complete score in mono stored in perfect condition and presented here in its debut. Previously only a handful of selections had been rerecorded by Mancini, a selection of which was integrated into the score to The Right Stuff.

The White Dawn tells the tale of three American whalers, shipwrecked in 1896 off the coast of Northern Canada, who are nursed back to health and taken in by a group of nomadic Eskimos. Billy (Warren Oates) is ornery and resentful, thinking only of escape and exploitation. Daggett (Timothy Bottoms) winds up embracing the native culture, and falls in love with a young woman named Neevee (Pilitak). Portagee (Louis Gossett Jr.) is somewhere in between. Eskimo leader Sarkak freely provides the men with food, shelter and women. But this foundation gradually erodes. Cultural differences widen into major rifts. As the tensions begin to boil over, the story ends in a shocking episode of violence.

Just Announced!
Jeremy {HWR:OLM}
Hosted by Unknown at 10:03 AM