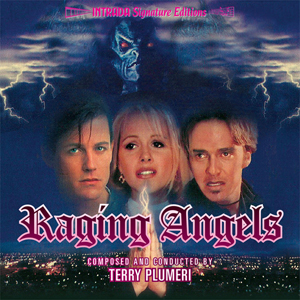 The 1995 horror film Raging Angels is filled with an atmosphere of churning and slashing evil that fights intensely to triumph over the innocence of a teenage couple. The film's foreboding undercurrent inspired composer Terry Plumeri to establish this evil from the opening note of the main title and further escalating this darkness through a gothic and expansive choir, superimposed over rhythmically driven instrumental voices. In contrast to this foreboding environment, Plumeri chose a less complex musical setting for the love theme associated with the characters of Chris and Lila. The accompaniment is string orchestra, with the solo voice of acoustic guitar, beautifully played by Federico Ramos. Another notable performance in the score is that of French actress, Arielle Dombasle (Megan), whose beautiful voice appears performing a traditional demonic incantation from the 15th century.

The story of Raging Angels centers on floundering musician Chris D’Amico (Sean Patrick Flanery), who has wrestled with the demons of alcoholism and a rocky relationship with girlfriend Lila (Monet Mazur). Things get even more complicated when she auditions to sing backup for Gramercy (Michael Paré), a fast-rising rock star and spokesperson for the Coalition for World Unity. This cult-like organization promotes a future built upon a single government—made up of the wisest people humanity has to offer. Sounds good, doesn't it?

Just Announced! We love composer Terry Plumeri and we love Michael Paré... what else do you need?
Jeremy {HWR:OLM}
Hosted by Unknown at 10:10 AM