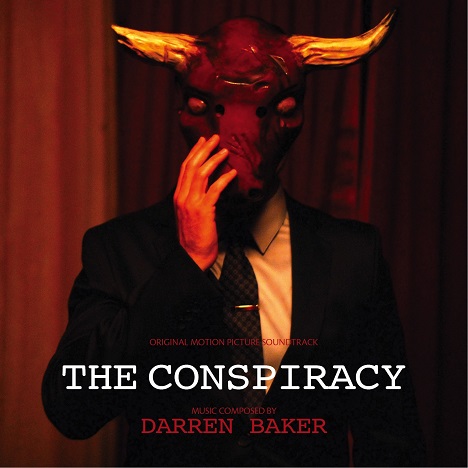 The Conspiracy [2013]
Music by: Darren Baker


Co-inciding with the theatrical releases in France and United Kingdom, and the DVD release in USA, Screamworks Records will release Darren Baker’s experimental and eclectic score to Christopher MacBride's chilling thriller, The Conspiracy. Taking you to the dark underbelly of conspiracy theories, this part-mockumentary, part found footage horror is about two filmmakers who grow fascinated with an insane preacher who spouts out the most complex conspiracy theories one can think of. When the man vanishes, our heroes start looking for clues and are soon sucked into the world of secret societies and worldwide conspiracies...

The score for The Conspiracy was written by Canadian composer Darren Baker, who has been making music since 1998. With relatively few feature-length credits to his name, Baker is still one of the most promising talents of the Canadian film music scene as his score to The Conspiracy can be best described as an intelligent mixture of György Ligeti (as heard in 2001: A Space Odyssey) and the lo-fi industrialist electronica recently popularized by the film scores of Trent Reznor and Atticus Ross (The Social Network). The score’s dramatic highpoint, entitled “Threnody For Mithras“, will be a real treat for fans of György Ligeti and Krzysztof Penderecki.

Just Announced!
-Jeremy [Retro]
Hosted by Unknown at 6:39 AM