(Sept. 9, 2013- Fuengirola, Spain) Composer Lorne Balfe (Salinger, Assassins Creed III video game) took the Spanish crowd by storm!  On September 7th he headlined the Playfest concert with a 30 minute set of his music including a sneak peak at the music for the upcoming release of BEYOND: Two Souls, and his now award winning music for Assassin’s Creed III.  After the performance, the organizers of the festival presented Balfe with the prestigious GoldSpirit Award for Best Video Game Soundtrack 2012.

"I am so proud to have won the GoldSpirit Award for Assassin’s Creed III,” said Balfe.  “It means especially a lot to have been given the award by the fans and to have the game’s music recognized at such a fantastic festival as Playfest with a very special concert was a wonderful experience. The score to Assassin’s Creed has been a fantastic part of my life and so it was a wonderful achievement for the music to be recognized." 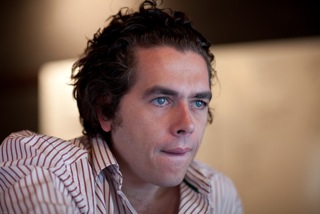 Balfe is not only a highly sought-after video game composer — he is a Grammy award winning and BAFTA nominated film composer from Inverness, Scotland.  Lorne is known for composing the scores to the Dreamworks’ animation Megamind, and Ubisoft’s Assassin’s Creed III.  Balfe earned his first Emmy nomination for the BBC and Sundance Channel mini-series Restless.

Balfe’s recent solo projects have kept him hard at work in the UK, composing for Ironclad, The Sweeney, and the upcoming films, Not Another Happy Ending (starring Karen Gillian of Doctor Who), Side by Side, the documentary Salinger, and The Frozen Ground, starring John Cusack, Nicolas Cage and Vanessa Hudgens. In collaboration with composer, Rachel Portman, Lorne has just completed the music for 10×10′s feature documentary, Girl Rising, directed by Academy Award nominee, Richard E. Robbins that features narration by actresses such as Meryl Streep and Cate Blanchett.

When he hasn’t been composing for film, Balfe has found additional footing in the video game world. In 2011, Balfe composed alongside Jesper Kyd for the game, Assassin’s Creed: Revelations and earned a BAFTA nomination for Best Original Music. A year later in 2012, Balfe was already hard at work composing as a solo composer for Skylanders: Giants, Assassin’s Creed III (which earned Balfe his second BAFTA nomination for Best Original Music) and Assassin’s Creed III: The Tyranny of King Washington.

Balfe’s ability to travel between the two worlds of film and video games is a perfect fit for the upcoming Playstation® 3 release, BEYOND: Two Souls, which Playfest audience were able to hear a sneak preview of at the September 7th concert.  The game and soundtrack will be available on October 8, 2013.