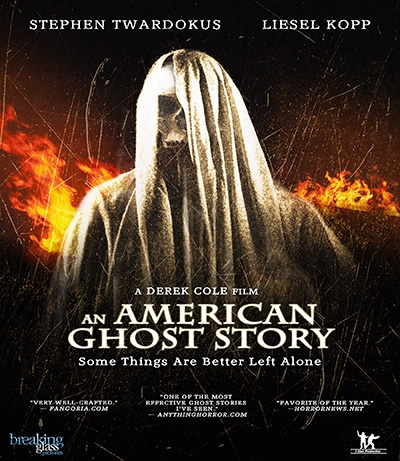 An American Ghost Story: Paul Anderson (Stephen Twardokus) and his girlfriend  Stella (Liesel Kopp) move into a house that is well known  for being haunted. Paul, a struggling writer, plans to write his first novel about his experiences with the paranormal.  What starts out as a fun and exciting adventure, soon  takes a very dangerous turn. They quickly realize some things are better left alone, and what you can't see, can hurt you.

Get it Here: "AMAZON"

I was back and forth in the start on this one as like any ghost story, "why don't you just leave the house" in this film they wanted to be there. I felt paid a little homage to other great ghost stories so have a writing pen ready as the lead wants record those experiences. At any moment there will be a knocking and the knocking isn't coming from the front door. It was a good old fashioned what is behind the door thriller, not filled with CGI  ghost... it was interesting.  It works, you want to be scared... this will help you along!
-Jeremy [Retro]

Oooo...always up for a good scary movie. Have to check this one out.