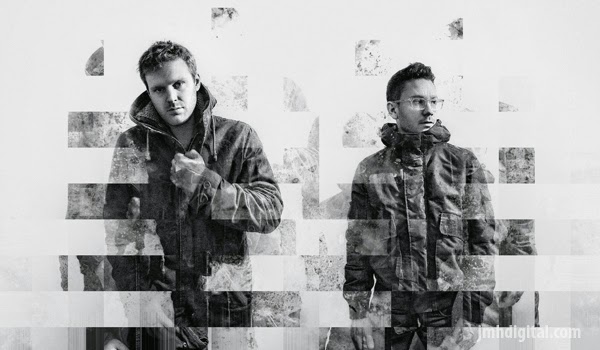 “Jonny Campbell [Director] was interested in using one artist and their songs for the entire series,” said Wilson.  In addition to writing the original score, the duo both wrote original songs and licensed in tracks from their catalog for the production.  “We spent months writing and recording before we saw one frame of footage.”

Solomon Grey is the London-based music project of Tom Kingston and Joe Wilson.  The duo met in Oxford when playing in a covers band.  Influenced by the Bristol scene and French electronica of the time, combined with a background in classical and jazz, the two set about to create music – a hybrid of organic instruments with computer programming and electronics - blurring the lines between analogue and digital.

They had been working both together and separately writing, producing and performing for many years before deciding to create Solomon Grey while away writing together on Ireland's Atlantic Coast.  In early 2013 they hooked up with the tastemaker label Black Butter to release their enduring debut single “Gen V.” A second single on Black Butter, “Firechild”, followed in November 2013 and brought the band to the attention of Kitsuné, who included the b-side “Last Century Man" on their “New Faces” compilation in March 2014.

Having crafted an evocative, highly visual and distinct sound the duo began simultaneously creating music for picture – first writing the soundtrack to THE WILD ATLANTIC WAY - a project for Tourism Ireland, and later scoring the BFI feature film GOZO. As composers, Solomon Grey was hired to not only provide original songs, but original score for the 2015 televised adaption of J.K. Rowling’s THE CASUAL VACANCY for BBC/HBO. The mini-series follows the citizens of the small British town of Pagford who fight for the spot on the parish council after Barry Fairbrother die, in an absorbing examination of modern British society.

To capture the atmosphere of Pagford, Solomon Grey went on location where they were shooting the series and recorded the sounds of the town.  “We found the score writing quite freeing – because the canvas was so broad – we could throw any ideas around and anything goes,” explained Kingston.  “When it comes to more detailed decisions about sound and atmosphere it is more like producing a pop song.”

“Interwoven within the score are elements from our own tracks, as a band/artist,” Wilson described.  “There are several strings and synth parts adapted to work within the score as well as some of our commercial tracks.”

“We took a lot from watching films like Her where Arcade Fire had used both their own music and composed music to really fill the world within the piece,” said Kingston.  “We wanted to create every musical element within the world of The Casual Vacancy and with the exception a few source tracks playing on a radio, we did that. This included rearranging the classic pieces for the big band to perform at Howard’s birthday bash, the music on Sukhvinder’s headphones and the music you hear in the background through bedroom walls and shop windows. It meant a lot more work for us, but it was worth it. We hope it gives the whole piece a feel that adds to its authenticity.”

Email ThisBlogThis!Share to TwitterShare to FacebookShare to Pinterest
Labels: Astralwerks