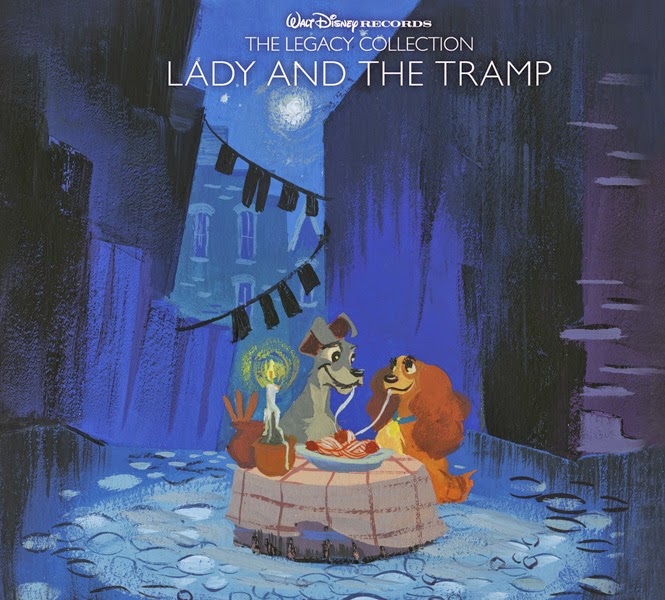 -------------------------------------------------------------------
Set in a quaint Middle American small town in the early 1900s, the 1955 Walt Disney film Lady and the Tramp centers on the charming romance between a pampered pooch and a bone-a-fide mutt. Told from a dog’s-eye point of view, Disney’s classic canine caper features unforgettable songs and a memorable score that is the musical tail wagging his beloved dog story.   Following Cinderella, this time around Disney wanted songs that would convey emotions and personality, as well as to help the Disney artists tell their cinematic story.  Disney turned to a fresh and invigorating source of songs: movie, radio, television and recording great, Peggy Lee, the sensuous songster who was a top-of-the-charts star.  Along with the talents of song writer Sonny Burke, the film featured a plethora of effervescent vocals.  Combined with the cracking score by composer Oliver Wallace, a nostalgic classic was born.

In 1997, the actual soundtrack elements were released on an album for the first time. The original Disneyland Records LP release were studio recordings and not the recordings from the original soundtrack (except for “Home Sweet Home”) that ultimately premiered in 1997.  Walt Disney Records has included those versions as bonus tracks on disc two following The Lost Chords for their premiere CD release.  Although the movie is a CinemaScope film and in stereo (at least the dialog and sound effects are), the music elements have always been in mono.  For this release, Disney music expert and restoration genius Randy Thornton has turned out the cleanest and brightest soundtrack version of this heartwarming classic.  Combined with the deluxe packaging of the Legacy collection featuring gorgeous new custom artwork, this new release is the ultimate edition and not to be missed.

Lady and the Tramp is available now and exclusive from Intrada, select soundtrack retailers and Amazon.com until August 2015 when it goes into wide release.

She's such a beautiful canine. I want to be just like her. Wait - what am I saying? I want to be the Tramp. Wait, never mind. Good movie pick, Jeremy. Is it over left? I've a braincell or two to collect.