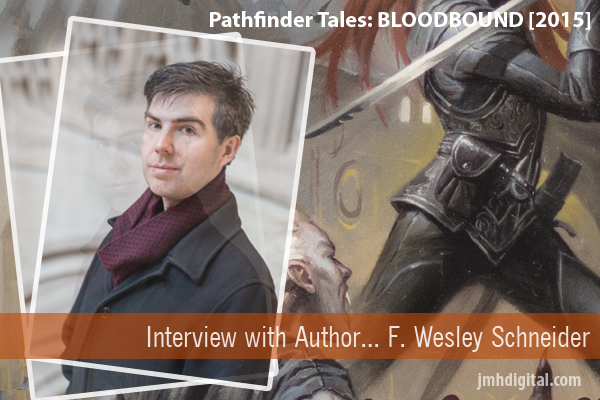 Great pleasure to share with you and a chat with book Author F. Wesley Schneider and his novel "Pathfinder Tales: Bloodbound". It's always awesome when I can bring you all something special, talk with someone who loves the same kinds of stuff we do and share in his project! THANK YOU!
Jeremy [The Wolf]

F. WESLEY SCHNEIDER: Whether I’m writing fiction or Pathfinder RPG adventures, the goal’s to tell a great story. They’re very different mediums, but their functions are the same: the attempt to take an outlandish idea and lead participants on some crazy ride. I’ve always enjoyed telling stories, which led me to roleplaying games in the first place. Some folks get into RPGs for the games themselves or the social elements, but for me gaming’s always been about rounding up friends and working together to create a story—to share some adventure only we’ll ever have. 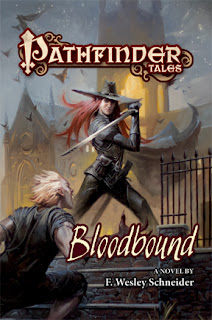 So it wasn’t a big leap to move over to fiction. As one of the creators of the Pathfinder RPG and the editor-in-chief at Paizo Inc., I spend most of my days writing or developing the Pathfinder setting in one way or another. While Pathfinder’s world includes the work of dozens of fantastically talented writers, I’m one of the creative who’s been there since the beginning and I’ve managed to carve out a few of my own niches. Probably the biggest of those is the land of Ustalav, Pathfinder’s realm of gothic horror—a corner of the setting that I selfishly guard. I’ve been involved in pretty much every effort set there, from outlining our creepy Carrion Crown Adventure Path series to literally writing the book on the place—a campaign guide called Rule of Fear. In a way, though, that’s all been preparation for writing Pathfinder Tales: Bloodbound.

You always hear about fantasy authors who craft elaborate worlds, full of maps and details that never overtly appear in their books. I’ve always loved writers like that, especially since I see so much of the fun of RPGs in that sort of world building. But in my backwards case, through Pathfinder I’ve had the opportunity to detail and share my land of gothic horror for years before leaping into fiction. It’s been a strange path, but when I told my friends and coworkers that I was working on a novel set in Ustalav, the typical reaction was “of course.”

Jeremy [The Wolf]: How do you hope the reaction from players of Pathfinder might be... giving game characters more life than just playing... if there are ones that crossover from the [RPG]?

F. WESLEY SCHNEIDER: The biggest challenge of telling stories via roleplaying games is that you don’t control the main characters—that’s the players’ domain. It’d be like reading Lord of the Rings and having every hobbit have his own quest or personal agenda. Often that leads to great stories, but for a storyteller it can be a narrative nightmare. But that’s all part of the game, and for an RPG’s narrator much of the fun comes from on-the-fly storytelling and indulging the players’ decisions.

What this means, though, is that the Pathfinder world doesn’t have a lot of built-in heroes. We don’t want Pathfinder players feeling like second fiddles to Gandalf or Conan, we want them to be Gandalf and Conan. That’s not to say that we don’t have a few major players though, and especially in a region that’s been detailed to the extent that Ustalav has, a few big names show up in Bloodbound.

The most obvious is one of my personal Mary-Sue characters, Ailson Kindler. Ms. Kindler provides the Pathfinder world’s answer to Abraham Van Helsing, being a veteran monster hunter with vast insight into the horrors of the undead. The difference with Kindler, though, is that she’s retired and is quite tired of strangers bringing life-threatening problems to her doorstep. I introduced Kindler into the Pathfinder world in 2008, attributing a quote from a made-up, in-world, Dracula-like novel to her. At the time, she was just a name, and a not so subtle nod to Bram Stoker himself—to “stoke” and to “kindle” meaning much the same thing. As the setting expanded, though, and we increasingly needed a source of in-world monster expertise, Kindler’s writing became more prolific. Eventually I even had the opportunity to include her in another fiction piece, my novella “Guilty Blood,” which also takes place in Ustalav. She saw a bit of screen-time there, but Bloodbound is the culmination of her lengthy development, from being just a name to becoming an active, fully realized character.

Ms. Kindler’s certainly a big one as far as characters from the Pathfinder world go, but particularly attentive Pathfinder readers will notice quite a few other nods, whether references to the Adventure Path series—like a line referencing the notorious nosferatu, Ramoska Arkminos—or to Pathfinder Tales’ other Ustalav-based novel, Dave Gross’s Prince of Wolves.

Jeremy [The Wolf]: What was the feeling of holding your novel "Pathfinder Tales: BLOODBOUND" in your hands for the first time, compared to your other gaming books you were involved in?

F. WESLEY SCHNEIDER: Bloodbound’s certainly the largest project I’ve ever tackled. It’s even larger than I intended, actually—a fact that’s pretty obvious if you compare its size to past Pathfinder Tales novels. I’m fantastically proud of it and feel like it’s the culmination of a ton of work, not just on the fiction front, but in developing my corner of the Pathfinder world into the thriving gothic nightmare I’ve always wanted. But even though it’s my name on the cover, there’s no way I can take sole credit for it. I work with a team of fantastically creative folks and my work’s altered and improved merely by exposure to their gravity.

As just one of countless examples, while I was writing Bloodbound, Pathfinder Adventure Path Developers Rob McCreary and Adam Daigle were working on our Mummy’s Mask campaign—a series of adventures rooted in the mythology and stories of ancient Egypt. So, when I needed a homeland for my vampire-hunting, Middle Eastern swordsman Tashan, our Egypt-inspired land of Osirion was an obvious choice. That might seems like a tiny calibration, but over the course of the many months I worked on Bloodbound, there are more little tweaks like this than I could ever list.
Working with such a fantastic team of talented people always feels a bit like cheating, as it makes brainstorming and getting criticism so easy. But I couldn’t value the Paizo crew’s feedback, encouragement, and brilliant ideas more. I certainly couldn’t have written Bloodbound without every one of them.

F. WESLEY SCHNEIDER has published countless gaming products for both Pathfinder and Dungeons & Dragons, and is a former assistant editor of Dragon magazine. Bloodbound is his first novel. [CLICK HERE FOR AMAZON LINK TO BLOODBOUND]
Hosted by Jeremy [Retro] at 2:00 AM