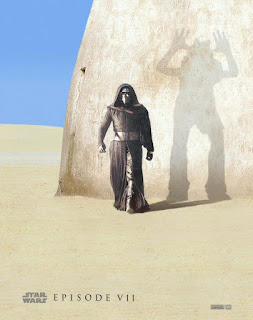 Back in the day when I was a kid I saw BEASTMASTER.  I was so impressed by the swords and sorcery opus that I declared it better than CONAN THE BARBARIAN.  Then some time went by and I entered my teens.  On the TBS channel BEASTMASTER came on. It had been many years since I had seen it so I was eager to be reminded as to why I would be so bold as to praise the film so highly.  After about ten minutes into the film my appreciation for the movie changed considerably.  I would be lying if I said I wasn't embarrassed by BEASTMASTER.  It was hokey, silly and nowhere near as perfect as CONAN THE BARBARIAN.  BEASTMASTER had flaws that I was too young and naive to noticed.  I was too amazed by the spectacle of sword play, wizardry and monsters.  Older me became aware of the weaker aspects of the film.  I had grown up.

Then came the STAR WARS prequels.....

I admit that when the prequels came out I loved them.  You could not find a more hardcore defender of them than me.  Jar Jar even made me laugh.  However the prequels bothered me somehow. I would not acknowledge the nagging feeling in the back of my head that formed after my initial viewing of them.  I had questions the films never answered.  What was a Sith?  Are we going to learn more about Midichlorians?  Who was Jedi Cypher Deus? (Name misspelled I'm sure.)  Thanks to my friend from Catchaflick I was shown the Mr. Plinkett review of THE PHANTOM MENACE.  I had to admit to myself that the prequels were terrible and not only that but the "Special" editions were an absolute abomination and a true travesty against the storytelling arts.  It wasn't exactly that hard for me to denounce the prequels because I had the privilege of having the original unaltered STAR WARS trilogy as my childhood.  Unfortunately for the kids of the 90's that grew up in the early 2000's they had the inferior prequels.  That is their childhood when it comes to STAR WARS.  Naturally they are going to defend their childhood inspirations and one way of doing that is coming up with fan theories.  I haven't looked into these because they have no real foundation.  Yet the most ridiculous one seems to be converting people as evident by people sharing the articles about it on Facebook over and over again.  Now there is a Youtube video getting passed around.  Apparently Jar Jar Binks is a Sith Lord....Say it with me in the best Mace Windu voice you can "A Sith Lord?"