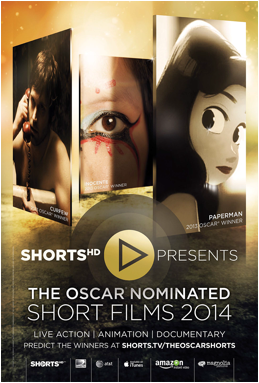 ShortsHDTM is the global home to short film, where short stories come to life in stunning high definition. Along with European sister channel ShortsTV®, the channels bring audiences captivating contemporary short form content from filmmakers across six continents. Following unprecedented growth in the demand for short films, it is now available to 40 million homes and is successfully entertaining over 11 million subscribers. ShortsHDTM is a world-leading short film media group, designed with movie enthusiasts and experimental ‘lean forward’ viewers in mind. Combining cutting edge short films with new spectacular HD technology, audiences of all ages can expand their viewing pleasure from the comforts of their own home, or on the move through mobile devices. ShortsHDTM obtains only high quality live action, animation, and documentary movies from the world’s most famous film festivals and independent suppliers. Through the acquisition of these films, the channel offers professional short filmmakers an unparalleled commercial medium to develop their careers.

ShortsHDTM is available in the United States on DirecTV and AT&T. ShortsTV® is available in France, Belgium, Luxembourg, the Netherlands, Turkey, Romania, and Eastern Africa. It is owned and operated by Shorts International Ltd, headquartered in London with its US head office in Los Angeles. Since 2006, Shorts International has produced the OSCAR® Nominated Short Film theatrical release, distributing it to cinemas across North America and Europe with its special global media partners. In 2008, Shorts International became one of the earliest iTunes movie partners, bringing hundreds of the world’s best independent shorts to the iTunes audience, years before the iTunes Movie Store launched. The films are now available in 54 countries worldwide.

DO I HAVE TO TAKE CARE OF EVERYTHING?
FINLAND / 7MIN

Mother Sini wakes up in a panic: she has slept in and the family is late for a wedding. She wakes up her husband Jokke and daughters Ella, 6, and Kerttu, 4. They start to prepare themselves in a hurry. Mother is going crazy since nobody else seems to be able to do anything right. Who has messed father’s shirt, hid girls’ dresses and the wedding gift?

A hospital’s eccentric janitor helps a young dying boy regain the joy and happiness of life.

JUST BEFORE LOSING EVERYTHING
FRANCE / 30MIN

While her children pretend to go to school, Miriam hurries to pick them up and take them to her work place. She explains to her boss that she has to leave the region in a rush.

The short film AQUEL NO ERA YO, written and directed by Spanish director Esteban Crespo, tells the story of Paula and Kaney. Two characters, an African child and a Spanish woman, who could have nothing in common, but will get to join their lives forever through a life-giving shot.

Doctor Williams is called in to examine the enigmatic Mr Voorman, a prisoner with a peculiar affliction: he believes he is a god. The doctor must decide on the sanity of Mr Voorman: is he a faker or a lunatic? Diagnose him insane and they can ship him off to the asylum. But before making a decision, the doctor has several questions in relation to Voorman’s claim: why would a god choose to be straitjacketed in a prison, is there a way he can validate his boast and what has any of this got to do with Belgium?

A wild boy is found in the woods by a solitary hunter and brought back to civilization. Alienated by a strange new environment, the boy tries to adapt by using the same strategies that kept him safe in the forest.

Walt Disney Animation Studios’ innovative new short “Get A Horse!” is a contemporary homage to the first animated shorts featuring Mickey Mouse, with all-new, black-and-white, hand-drawn animation that’s paired with full-color, 3D, CG filmmaking—in the same frame. Mickey (voice of Walt Disney), his favorite gal pal Minnie Mouse and their friends Horace Horsecollar and Clarabelle Cow delight in a musical haywagon ride—until Peg-Leg Pete shows up and tries to run them off the road. This groundbreaking short takes a sharp turn when Mickey finds himself separated from Minnie and must use every trick up his sleeve to find his way back to her. Directed by Lauren MacMullan and produced by Dorothy McKim, “Get A Horse!” is in theaters in front of “Frozen”.

Mr Hublot lives in a world where characters are made partially of mechanical parts, driving huge vehicles, rub shoulders with each other. A world where the giant scale of machines and the relentless use of salvaged materials reign supreme.

A withdrawn, idiosyncratic character with OCD, Mr Hublot is scared of change and the outside world. His solution: he doesn't step foot outside his apartment! The arrival of the dog Robot Pet will turn his life upside down: he has to share his home with this very invasive companion...

The 18th Century. On a stormy night, deep in the mountains, a man has lost his way and comes across a small shrine. When he enters, the space suddenly turns into a room in a different world. One after another appear abandoned umbrellas, discarded kimonos, and such spectral things. The man painstakingly mends these paraphernalia, which harbor deep-seated bitterness, and brings them comfort. “How well you served people before you turned to rags. Your rest is earned.”

A half hour animated film based on the wonderful children’s picture book written by Julia Donaldson and illustrated by Axel Scheffler. Room On The Broom is a magical tale about friendship and family from Magic Light Pictures, the producers of the hugely successful The Gruffalo and The Gruffalo’s Child.

A story about a kind witch who invites a surprising collection of animals to join her on her broom, much to the frustration of her cat. The gang ultimately saves the witch from a fearsome dragon, and in gratitude she rewards them with a magnificent new broom which has room for everyone. Featuring the voices of Gillian Anderson (Witch), Rob Brydon (Cat), Martin Clunes (Dog), Sally Hawkins (Bird), Simon Pegg (Narrator), Timothy Spall (Dragon), David Walliams (Frog).

Ra Paulette digs cathedral-like, 'eighth wonder of the world' art caves into the sandstone cliffs of Northern New Mexico. Each creation takes him years to complete, and each is a masterwork. But patrons who have commissioned caves have cut off nearly all of his projects due to artistic differences. Fed up, Ra has chosen to forego commissions altogether and create a massive, 10-year project, his Magnum Opus.

The worlds of a former neo-Nazi and the gay victim of his senseless hate crime attack collide by chance 25 years after the incident that dramatically shaped both of their lives. They proceed to embark on a journey of forgiveness that challenges both to grapple with their beliefs and fears, eventually leading to an improbable collaboration... and friendship.

‘Karama Has No Walls’ is a documentary film set in Change Square, in Yemen’s capital city Sana’a, where members of a heavily armed population set aside their weapons, and peacefully assembled in early 2011 to demand the fall of Ali Abdullah Saleh’s 33 year autocratic rule.

As pro-government snipers shot dead 53 protesters and injured a thousand more, the Yemen nation was shaken to its core and the masses flocked to the square in solidarity with their fellow citizens. The film illustrates the nature of the 2011 Yemeni uprising in stark contrast to the gross violations of human rights that took place on the Friday of Dignity (Juma’at El-Karama), marking a turning point in Yemen’s revolution. Through the lenses of two cameramen and the accounts of two fathers, the film retells the story of the people behind the statistics and news reports, encapsulating the tragic events of the day as they unfolded from a prayer gathering into a barrage of bullets.

Prison Terminal: The Last Days of Private Jack Hall, an HBO Documentary Film, is a moving cinema verité documentary that breaks through the walls of one of America’s oldest maximum security prisons to tell the story of the final months in the life of a terminally ill prisoner, Jack Hall and the hospice volunteers, they themselves prisoners, who care for him.

HBO’s Prison Terminal: The Last Days of Private Jack Hall draws from footage shot over a six-month period behind the walls of the Iowa State Penitentiary and provides a fascinating and often poignant account of how the hospice experience can profoundly touch even the forsaken lives of the incarcerated.

The film debuts March 31 on HBO.

The Lady In Number 6 is one of the most inspirational and uplifting stories of the year. 109 year old, Alice Herz Sommer, the world's oldest pianist and Holocaust survivor shares her story on how to achieve a long and happy life. She discusses the importance of music, laughter and how to have an optimistic outlook on life.
Hosted by Jeremy [Retro] at 1:47 PM