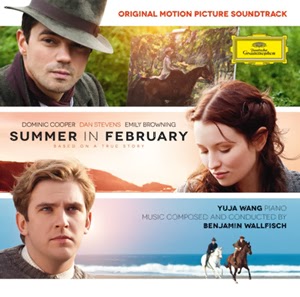 (Santa Monica, CA) January 7, 2014 - Summer in February, directed by Christopher Menaul and starring Dan Stevens (Downton Abbey), Dominic Cooper (The Devil's Double) and Emily Browning (Sleeping Beauty), is scheduled for a U.S. theatrical release on January 17, 2014. The movie's soundtrack is composed by Benjamin Wallfisch (Hours, The Thirteenth Tale, Desert Dancer) and features pianist Yuja Wang as soloist. The soundtrack will be released in the U.S. by Deutsche Grammophon on January 14, 2014.

The score for Summer in February was previously released in Europe to critical acclaim, including Classic FM - "Wallfisch's lush score is sumptuously romantic and atmospheric," and Film Score Monthly - "A gorgeous listening experience." The score garnered composer Benjamin Wallfisch his third nomination at the 2013 World Soundtrack Awards and was recently awarded 'Best Score - Special Feature' in the 2013 Hollywood Music in Media Awards.

A sweeping romance set at a bohemian artist colony on the picturesque coasts of pre-war England, Summer in February is based on the true story of painter Sir Alfred Munnings (Dominic Cooper) and his blue-blood best friend Gilbert Evans (Dan Stevens). Born into a working-class family, Munnings rises to become one of the premiere British artists of his time, winning the affection of aristocratic beauty Florence Carter-Wood (Emily Browning). But when Gilbert falls for Florence as well, a love triangle emerges with tragic consequences. Tribeca Film will release the movie in the U.S. beginning January 7, 2014 on cable/telco and satellite video-on-demand and digital platforms followed by a theatrical release beginning on January 17, 2014.

I think I'd deeply enjoy this one, Jeremy